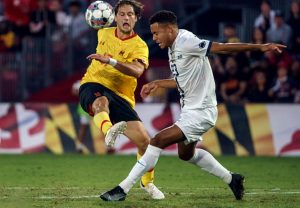 The 2023 Toronto FC draft will either be a forgettable draft or a draft where they snatch some quality players late in the draft. It would not get the headlines of some of the draft nights of other MLS teams, but there are still two players to keep in mind.

The 2023 Toronto FC Draft Night Was Quiet on December 22

The Canadian from Mississauga, Jalen Watson, played the defender position for Penn State. In addition, the academy teams he played for are Erin Mill SC and the Vancouver Whitecaps FC. The 6’0 player played in and started all 16 players on defence this year for Penn State. Watson won an award each year he played for Penn State (source: PSU Sports).

In his four seasons with Penn State, he scored one goal and dished out three assists. Watson is a more reserved person, but is not afraid to be loud on the field according to David Polak of The Daily Collegian:

“I try to be as loud as I can on the field, but naturally I’m more of a quiet guy,” Watson said.

Judging by the videos of his time with Penn State, he can be in the right positions to clear the ball when necessary (source: Jordie Isen’s YouTube Channel).

Merci. Forever in my heart

With Chris Mavinga recently leaving the club, defence is a clear weakness that exists within the team. Watson will need to earn his spot as a defender with TFC and it will be a big individual task to accomplish in 2023, but it is still possible that he gets playing time if he plays well.

Extremely grateful for this opportunity! https://t.co/OsPr4FuEI5

In 2019, he won the Mid-American Conference Freshman of the Year and picked up All-MAC First Team honours and in 2021 was named to the Second Team All-MAC and named Academic All-MAC.

When just looking at this season, he had 11 goals and dished out eight assists. This included playing a big role in scoring a goal each on November 12 against Akron and November 17 against Louisville last year. These were important goals in one-goal wins. He also had four goals against Chicago State on October 2, 2022, and two goals against the Detroit Mercury on October 5, 2022.

Being drafted 61, most draft picks around there have trouble getting playing time with their main team. Notable names that are ahead of Sharp include players like Ayo Akinola, Federico Bernardeschi, and Jesús Jiménez. He, like Watson, will probably play a lot with Toronto FC II of MLS Next Pro.

TFC maybe should have done something to get at least one first-round draft pick, which is the reason for the slightly lower grade. However, there are now other avenues to get players of that age including homegrown players. As a result, the MLS SuperDraft, while still important, is not always where all the best young players in North America come from.

READ MORE: The 2022 Toronto FC MLS Season: What Could They Improve On?

Also, the draft picks they picked do carry some excitement for the Reds as they look to make the MLS Cup Playoffs for the first time since 2020.

The post The 2023 Toronto FC Draft: A Quiet Draft Night for the Reds appeared first on Last Word On Soccer.