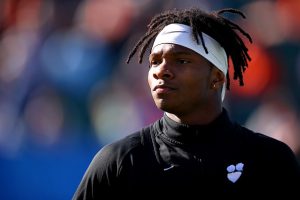 The 2023 MLS SuperDraft took place earlier thanks to the MLS season starting in February. One storyline is yet another new MLS team entering their first-ever MLS SuperDraft, this time it is St Louis CITY SC.

The First Four Draft Picks of the 2023 MLS SuperDraft

Hamady Diop, the defender who was born in Dakar, Senegal, started all 13 games in his junior year. In that stretch, he scored two goals, both coming last month. His first goal this year came against Notre Dame in a 3-1 win. He also scored a goal in a losing 2-1 effort to UCLA.

He is also the first-ever Senegalese player to be drafted first overall. The six-foot defender, who weighs 186 lbs made the TopDrawer.com Postseason Top 100 Freshman from 2020-21 at the 40th position. Also, in that same year, he won the TopDrawerSoccer.com Team of the Week on both March 23 and September 13. Diop would then make Second-team All-ACC and Second-team All-South Region in both 2021 and 2022 according to the Clemson Tigers. Ari Liljenwall of MLS Soccer has the quote from Diop on what it means to be drafted first overall:

The Generation Adidas player will have a big shot at making the team with a team just entering its second season in the league. This pick also means that Charlotte becomes the first team since D.C. United in 2003 and 2004 to pick consecutive first-round picks in the first round.

Shakur Mohammed, the Ghanaian forward, scored 10 goals and dished out two assists with Duke. There were also three times where Mohammed scored two goals in a game this year, this included scoring the two only goals of the game in a 2-0 win over Notre Dame on October 14.

Mohammed is a player that has impressed the Orlando City SC organization and is looking forward to playing with the team. Michael Citro from SB Nation has the quotes of this Ghana player:

“I spoke to (Orlando) a few days ago, and I was telling my host dad, it seems like an elite organization and, you know, it just aligns with my values and all that. So, I’m ready to go and the purple (color) is for sure. a plus. So, let’s go get it.”

The now Colorado Rapids player is from the province of Quebec. Moïse Bombito is from Generation Adidas and is a French-Canadian. The kid who grew up in Montreal, Quebec, scored four goals in 2022, including scoring a goal against UMBC in a 2-0 win.

The six-foot-three back defender will be looking to make his name with Colorado next year. He is also a team player as noted from his time playing in university (source: UNH Wildcats):

“The brotherhood that I have with my teammates.”

Bolma, like Mohammed, is also from Ghana. Seth Macomber of SB Nation has a quote of Bolma and his skillsets:

“I can really fit into different roles,” Bolma told media on Wednesday. “As I moved on from high school to college, coach [Sasho Cirovski of Maryland] saw me as more fast-paced and everything else. He tried me on the wing and that went well. I was able to do that as well. I played as a wing and that is when I had my breakout year in Maryland.”

Storylines of the 2023 MLS SuperDraft Picks

Canada was another story, having four players drafted in the first round, including two in the top ten. Overall, seven Canadians were drafted, showing the growth of the game in Canada with the establishment of the three Canadian MLS teams. With the CanWNT winning Gold in Tokyo 2020 and the CanMNT making the FIFA World Cup for the first time in 36 years, expect the popularity of Canadian soccer to continue to grow. In terms of schools, Syracuse led with five draft picks, followed closely by Maryland with four.

The MLS NEXT Pro league made some history on the draft yesterday as San Jose Earthquakes II’s forward Maximilian Arfsten was drafted 14th overall. It will be interesting how that league grows and how many more of these players get drafted in the MLS SuperDraft.

The post The 2023 MLS SuperDraft Storylines and Overview appeared first on Last Word On Soccer.