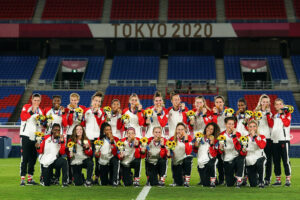 The 2021 CanWNT will go down as the greatest year in both the men’s and women’s national programs. It was not all promising to start the year though in the SheBelieves Cup. However, it gave Canada enough preparation for the upcoming friendlies and the Summer Olympics.

The 2021 CanWNT Made History

The 2021 CanWNT had some standout performers. Jessie Fleming’s penalty was clinical and Vanessa Gilles’s defence was exceptional. However, without Stephanie Labbé, the CanWNT may not have gotten past the quarterfinals against Brazil. That game was probably the best Labbé had ever played in a CanWNT uniform. This included being brave and getting the ball in time just before extra time ended.

Labbé also had an amazing penalty save percentage in the Summer Olympics. She made two saves on five shots to help give the CanWNT the quarterfinal win. Also, against the U.S., Labbé made a terrific save from a Julia Ertz header that was heading into the back of the net.

Then in the final, Labbé was probably the player of the game in the CanWNT’s biggest ever game. She again was terrific in the penalty shootout when her team needed her by only allowing two goals from six shots. Yes, two of those shots missed the target. However, that might have been because of Labbé’s smile and moving around the net that might have made the Swedish players nervous. This is what goalkeeper Labbe said according to Rob Williams of Daily Hive.

“There’s no pressure on me; I’m not supposed to make saves,” Labbé told reporters after the game. “And if I can make a save, it’s great. So, I go into it just like super calm and relaxed, and just like totally being in the moment and doing everything that I can to just trust myself.”

CanWNT converted on their penalties

The CanWNT converted their penalties when they needed them the most. Yes, Janine Beckie missed a penalty against Chile in the Summer Olympics. Canada also got help from Labbe, especially in the final. They also converted four of their five penalties against Brazil. Also, there was one player that came to mind for taking advantage of their penalties.

This was Jessie Fleming. She converted four penalties in the knockout stage. This included scoring the game-winning goal against arch-rivals USA and two goals against Sweden. One of them came in normal time, and if Fleming did not convert, Sweden would have won the Gold Medal and there would have been no penalties.

Fleming and Deanne Rose converted their penalties. Of course, in the sudden death of penalties, Labbe made a save and Julia Grosso converted the penalty to give the CanWNT their first-ever gold.

The defence of the CanWNT was solid. They were never a team that would get blown out by any team that they faced this year. There were positive signs of this even before the Olympics began. The CanWNT got clean sheet wins against Wales and England on the road. The latter is more impressive as England is a top 10 women’s soccer nation.

Vanessa Gilles is HOLDING IT DOWN

Vanessa Gilles and also Kadeisha Buchanan were the standouts for the CanWNT on the defensive end. In particular, she played spectacularly in all three knockout stage games of the Olympics. For example, against Brazil, Gilles made two terrific tackles in the 64 and 69-minute of play. This is while Kadeisha Buchanan blocked a shot in the 39-minute and made a good tackle in the 44-minute. The defence also played really well against the USWNT. As a result, both Brazil and the USWNT had limited shots on goal against Canada.

Then against Sweden, the defence would continue to impress. Buchanan in particular made a game-saving block in the 90-minute to keep the game tied. Gilles was excellent as usual and even Christine Sinclair made some critical defensive plays. The defence in the 118-minute by Canada though showed the chemistry and togetherness to work together in order to achieve a collective goal.

The CanWNT did not score any open-play goal in any of the three knockout games in the Olympics. It also led to some disappointing results. Thankfully, none of them happened in the Olympics, except for maybe the Japan game.

84′ Shelina Zadorsky of #CANWNT had two chances to score but was stopped by the #SeleçãoFeminina goalkeeper. #BRAvCAN | 0-2 | #SheBelievesCup

The CanWNT had three positives on this list. The goalkeeping though was covered with Stephanie Labbe being the Team MVP this year. Also, the CanWNT won gold and that is all that matters.

The question is, is it as significant as the 2012 bronze medal? Well, that remains to be seen. The CanWNT’s bronze in 2012 elevated the game of women’s soccer to a level never seen before. The popularity of the game has increased with a bronze in 2016 and a gold in 2021. As a result, the Celebration Tour games have already started, with the first one taking place in Ottawa.

“I think we’re the only country in the top ten without a league. It’s time for that to change. That’s the next goal to get professional soccer to Canada.”@CanWNT

Getting a professional league/team(s) is part of it. As Duane Rollins mentioned, and also explained in Cami Kapke’s article, ownership from Calgary is actively looking for an NWSL team. Presumably, though, the league talked about in Kapke’s article is the WPSL Canada. WPSL Canada is a planned semi-pro league. There is also Toronto, as Jozy Altidore made a Tweet of that possibility.

As for a possible league, according to John Molinaro of Sportsnet, Diana Matheson said it will take three-five years to get a pro women’s soccer league. It might be longer than what people hope for. However, it looks like it is going to happen, which is not something that could be said at the end of 2020.

Picture credit to Daniela Porcelli of Canada Soccer on August 6, 2021.

The post The 2021 CanWNT Year Review – The Best Year Ever appeared first on Last Word On Soccer.