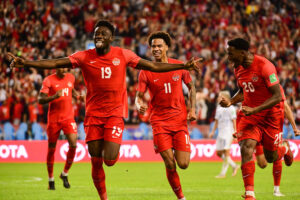 How will the table look by the end of this round of qualifiers?

This was a tough one, but Alphonso Davies ends up earning the award. Yes, he did not have a great November window. However, Mexico started getting several scoring chances after Davies was substituted out of the game. This shows how important Davies is, even when he is not playing well. The fact is many players were covering Davies, so this allows other players to shine like Cyle Larin and Jonathan David. Haiti used this tactic against Davies in World Cup qualifying.

He was also there for the big moments for Canada in the September and October windows of World Cup qualifying. One example is the assist he gave Cyle Larin in the 62-minute against the USMNT. Also, his terrific assist in October where his superb pass to Jonathan Osorio led to the game-tying goal against Mexico. And then, of course, his game against Panama, where he was involved in three of Canada’s four goals. This included his spectacular goal to take the lead at BMO Field.

This included winning 11-0 over the Cayman Islands and a key 4-0 win over Suriname. In that Suriname game, David scored a hat-trick against Suriname. Then, the CanMNT played against Haiti in the second round. Canada prevailed against Haiti and won both legs. Cyle Larin might have been the best player in the two-legs, scoring two of Canada’s four goals.

Defence has been solid

The CanMNT’s defence has been at times spectacular. Of all the competitive games they have played, they have only given up more than one goal once. This was when they lost to Mexico 2-1 in the Concacaf Gold Cup semi-finals. Every other game they have either shut down the other team or only allowed one goal to be scored. This was how Canada got big results on the road against the U.S. and Mexico.

Full Game Summary: #CanMNT was the better team but did not take advantage of their chances.

Both teams played well defensively, especially Steven Vitória.#PasiónyOrgullo played better in the second half. Scoring chances were not as dangerous.#MEXvCAN | 1-1 | #CWCQ2022

Steven Vitória made three fantastic defensive plays against Mexico to preserve the tie at Estadio Azteca. Vitória does not get the praise he deserves and was probably one of Canada’s best players in 2021. Canada also played well defensively against Jamaica. Doneil Henry was probably the best player defensively in that Jamaica game.

This is going to sound contradictory to the point about Canada scoring lots of goals. However, there were moments when the CanMNT should have taken points and maybe should have even more points in the Octagonal World Cup qualifying.

FT from Kansas City, Kansas in the final match of 2021 Concacaf Gold Cup Group B action.#CANMNT

Two games come to mind in this regard. This was the 1-0 loss against the U.S. in the Gold Cup and their opening home draw against Honduras in the Octagonal World Cup of qualifying.

In the game against the U.S., Canada had several chances to score. The CanMNT had more shots and shots on goal than the U.S. However, despite that, Canada was unable to find the back of the net. Tajon Buchanan for example had some big chances, but was unable to convert.

Then, in the game against Honduras. Canada had several chances to score goals in the second half. They had 15 shots in that game, but only had three shots on goal. In the second half, Larin scored the equalizing goal via a penalty. Larin had a few headers to potentially score and a late Laryea volley missed the net. This is what Herdman said about the game according to BTS Vancouver, Canada Soccer:

“On another night, that’s maybe 2 or 3 goals (for us),” Herdman lamented. “And all the fans would be heading home with 3 points in the bag and happy.”

These were two games where it got away from Canada.

Giving up the first goal of the game

Honduras strike first as Alexander Lopez scores from the penalty spot, before being carried off the field with an apparent hamstring injury

In both the September and October windows, Canada gave up the first goal four times in their first six games. This leaves something to be desired for the CanMNT. The only win they got from those four games was the 4-1 win over Panama at BMO Field.

They dropped points to Honduras after a slow start at home in World Cup qualifying. Also, as well as Canada has played against Mexico and USA, they have allowed the first goal two times each in 2021. This resulted in Canada losing both Gold Cup games to the U.S. and Mexico. The U.S. goal felt preventable though as Buchanan made a defensive mistake very early on in the game.

2021: CanMNT is the most improved national team

Good times in Canadian soccer as the #CanMNT is this year’s ‘Most Improved Side’ according to the FIFA rankings. https://t.co/31031dHUK4

The CanMNT made the biggest jump of any nation in the world. To start the year in 2021, the CanMNT was ranked 72nd in the world and seventh in Concacaf. They are now ranked 40th in the world and third in Concacaf according to the FIFA rankings. Also, 40th is tied for the highest ranking they have ever received, which was also accomplished in 1998.

The post The 2021 CanMNT Year Review: The Most Improved Team appeared first on Last Word On Soccer.