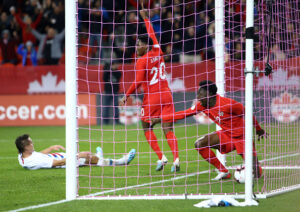 The 2021 CanMNT Gold Cup will start on July 11. This will be CanMNT’s fifteenth Gold Cup appearance. It is also the eighteenth CanMNT appearance in the major Concacaf tournament when counting the Concacaf Championship. Canada has won in Concacaf twice in its national team’s history. The first time was in 1985 in the Concacaf Championship. The second time was the 2000 Concacaf Gold Cup. Both CanMNT and the USMNT made the 2021 Concacaf Gold Cup via the 2019-20 Concacaf Nations League A.

Haiti will be very familiar with the Canadian men’s national team. These two rivals have faced each other in three competitive games since 2019. Haiti was the one that eliminated Canada from the 2019 Concacaf Gold Cup. This is while Canada recently eliminated Haiti from qualifying for the 2022 FIFA World Cup in June.

This meant that the CanMNT would make the final stage of World Cup qualifying for the first time since the 1998 World Cup qualification cycle. This is what John Herdman said about the accomplishment according to Derek Van Diest of the Toronto Sun:

“I feel pride for people who have been waiting for this opportunity for so long,” Herdman said following the 3-0 win against Haiti in the Chicago suburb of Bridgeview, Ill., on Tuesday.

It was a two-leg aggregate match. Canada won both games against Haiti. Cyle Larin scored the game-winner in leg one in Haiti. Then in leg two, Canada again won the game 3-0 at their U.S. home in Bridgeview, Illinois. This included two second-half goals and an own goal committed by the Haitian goalkeeper Josué Duverger.

The hero of the day with his Hat-Trick

was able to advance to the Group Stage of the #GoldCup21

His first tally became the goal of the day presented by @ToyotaLatino#ThisIsOurs pic.twitter.com/9SpWA4E1r3

Their MLS midfielder is Columbus Crew SC player Derrick Etienne Jr. He has scored five goals in 29 appearances for Haiti. Etienne also scored a big goal, which played a part in Columbus winning their second MLS Cup. There is also CPL centre-back Jems Geffrard. He has played for the Haitian team since 2017 and has made 17 appearances.

Martinique does not have an official ranking as they are a France overseas territory. However, they do have a Concacaf ranking. They are ranked 11th in the region. Both Martinique and Canada have faced each other three times. Canada has won two times and Martinique has won one time. The Canadians won the last meeting in 2019 by a scoreline of 4-0. It is important to note though that Martinique defeated Canada in the 2013 Concacaf Gold Cup by a scoreline of 1-0.

Their Starting XI consists of players who mainly play in Martinique. There are also players who play in Europe although it is not the first-tier club of any European league. Both Kévin Fortuné of AJ Auxerre and Stéphane Abaul of Club Franciscain are on the team. They both scored goals in the last Concacaf Gold Cup in 2019 against Cuba in a 0-3 victory.

Along with Haiti, this matchup will probably be a must-watch game for CanMNT fans. The reigning Concacaf Nations League champions won the trophy against their biggest rivals Mexico. They are currently ranked 20th in FIFA, which puts them in second place in the Concacaf rankings.

Take an inside look at the #USMNT’s epic 3-2 extra time win vs.

in the Nations League Final. #BehindTheCrest presented by @VW. pic.twitter.com/NKh9hsU8Hx

The USMNT will have a roster consisting of mainly MLS players. One of the few players from Europe includes Shaq Moore, who currently plays for Tenerife. Some notable players on the list include Brad Guzan, goalkeeper of Atlanta United FC.

One of the other players to watch out for is Gyasi Zardes. Zardes won the MLS Cup last year with Columbus and in 2014 with the LA Galaxy. He won the Gold Cup with the U.S. in 2015. He also made an MLS All-Star appearance in 2015 and won the MLS Comeback Player of the Year Award in 2018. More importantly, Zardes scored two goals against the CanMNT back in 2019. The U.S. won that game 4-1 at Exploria Stadium in Orlando, Florida in the Concacaf Nations League competition.

This will be a harder group than the one CanMNT participated in in 2019. However, the CanMNT has become much better from two years ago.

Canada Soccer has announced its 23-player roster for the upcoming 2021 Concacaf Gold Cup.https://t.co/G0vPKv8LoY

The expectation for CanMNT is to make the Gold Cup semi-finals. However, CanMNT certainly has the talent to win the group and make it to the final. Martinique should not be a problem for Canada. Haiti might give them some trouble as they are a physical team, but CanMNT has some great players in Concacaf. This includes Alphonso Davies. Also, Ayo Akinola has confirmed his commitment to Canada. He has decided to play for CanMNT over the USMNT.

This is not to say that Canada is necessarily a better team than the U.S. The problem with the U.S. is that many of their European players are not playing in the Concacaf Gold Cup. This is while Canada has a lot of those players from World Cup qualifying coming to represent the CanMNT. The U.S. could still find a way to finish first. This is especially true with the home crowd on their side. Canada starts off against Martinique at 6:30 p.m. ET on July 11. They will then face Haiti at 7:30 p.m. ET on July 15 and the USMNT on July 18 at 5:00 p.m. ET. All CanMNT group stage games will take place at Children’s Mercy Park in Kansas City, Kansas. All CanMNT games can be watched on OneSoccer.