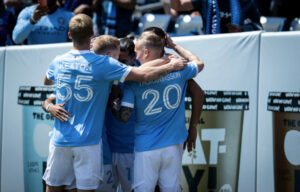 Under the bright lights of Subaru Park, a newly decisive New York City FC defeated the hometown Philadelphia Union 2-0 on Saturday night. Goals by Jesus Medina and Taty Castellanos put the exclamation point on a dominant City performance, while an early first-half red card by Jose Martinez handcuffed the former Supporters Shield champions throughout the night.

City was dominant in the opening stages of the match. Clinical link-up play in the midfield third was a familiar site to NYCFC’s previous two matches; and similar to previous meetings, The Pigeons struck first. Just five minutes in, a patient Jesus Medina found the overlapping run of Anton Tinnerholm, who whipped in a one-time cross to the near post for the aforementioned Medina to slot it home past Philadelphia’s Andre Blake.

Despite a tumultuous start to his MLS campaign, Medina has come alive in 2021. The young-designated player now has three goals in as many matches. This already equals his 2019 campaign in 15 fewer matches.

Martinez gets his walking papers

As the first half progressed, City’s midfield dominance continued, frustrating a Philadelphia side that’s coming off of a 3-0 loss to Atlanta United in the midweek. The match became a physical one, with five bookings being given by the end of the first half.

The most notable of which came in the 16th minute, when Union holding midfielder Jose Martinez was shown red after a challenge on Valentin Castellanos. A VAR review showed the Venezuelan intentionally elbowing the City striker while he was going to ground.

“El Brujo’s” first red card of his Philly career proved decisive, as Union was stuck on the defensive front for the remainder of the match.

Despite nearly 70% possession and 16 shots an hour in, NYCFC held a similar weakness throughout the match that could be seen throughout 2021: The lack of a proper fox in the box striker to finish off chances.

“City has money to spend, and they just need a killer in the box… When it is time for the big dance, they better be ready,” Proclaimed NYCFC color commentator Ian Joy as the chances fell to the wayside.

Ultimately, it would be Valentin Castellanos that would silence those critics just for the night. In the 66th minute, Castellanos intercepted the ball from Jakob Glesnes in the box and finished with a Rabona in front of the empty net.

“Taty,” a natural winger who’s played as a center forward since Heber’s injury last season, has recently been linked with a move to Palmeiras in Brazil for a reported eight-figure transfer fee. Rumors have been aplenty, with a report in the week saying Taty has asked not to feature for NYCFC while the possible transfer occurs. Nonetheless, the 22-year-old started and made his imprint on a decisive City victory.

With the victory, a once questionable NYCFC squad finds themselves 2nd in the Eastern Conference live table after two straight victories. The Pigeons (2-1-0) will look to make it three victories in as many matches when they face another playoff contender in Orlando City at Exploria Stadium next Saturday.

Following the home defeat, Philadelphia (0-2-1) drops down to 12th in the east, but just two points off the top seven in the early stages of the season. The fixture congestion doesn’t get better for the Union, however, with the second leg of the CONCACAF Champions League quarterfinals vs. Atlanta United on Tuesday and a 1 o’clock kickoff against the Chicago Fire on Saturday.