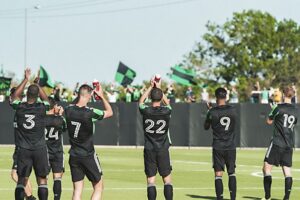 EDITORIAL – I want to take a look at Austin FC five games into their inaugural season. What have we got? Two wins, three defeats, lots of firsts. The first game, first goal, first defeat, first victory, first yellow card and first red card, first penalty conceded – then promptly saved. To quote Russell Crowe’s gladiator Maximus, “Are you not entertained?” The Verde certainly haven’t been boring.

Takes Stock of Austin FC Five Games Into the Season

Their highly energized fanbase remains positive, despite rumblings that have understandably followed two consecutive losses. That the fanbase remains upbeat, though, is important. Austin FC are in their infancy. There is much to learn, and much still to do. The team needs to continue to gel and grow, becoming more consistent as the season progresses towards the business end.

After five matches, here are five keys to keeping the Verde’s spirits up and hopes high…

1) Players: Staying with the theme of five, a quintuple of Austin FC players have really shone so far this season. One was expected to; the others, perhaps, represent more of a surprise. Captain Alex Ring arrived in Austin with much fanfare, and rightly so. The former Finnish international has not disappointed, being arguably Austin’s most consistent player for the first three games.

A lapse of judgment saw him ejected from the Sporting KC contest, a game that without him Austin went on to lose. His absence in the next game only served to underscore his importance to the team, as they further capitulated versus LA Galaxy.

Austin’s first-ever goal scorer and current joint-leading scorer Diego Fagundez has quickly ingratiated himself to the Verde faithful. His recognition of the traveling fans in his goal celebrations will have launched many a tattoo. At the other end of the field, defensive man-mountain Jhohan Romaña, has acquitted himself with distinction. His remarkable consistency, even allowing for the odd mistake, belies his young age and lack of MLS experience.

Jared Stroud appeared to have a bit of a chip on his shoulder following his departure from NY Red Bulls – and he’s putting that energy to good use for his new team. Stroud’s tireless running both in defense and attack, coupled with his sublime crossing ability – already contributing to a pair of goals – is proving New York’s loss is very much Austin’s gain.

Finally, Brad Stuver, always the bridesmaid, never the bride. Again, more fool his former employees. Stuver is making up for lost time. With every commanding performance between the pipes, he’s demonstrating why he absolutely deserves to be an MLS starting goalkeeper.

2) Style: Whether your team wins or losses, you want to be proud of the way they play the game. Austin FC have a very distinct style. They are committed to a possession-based game that requires every player be involved. They press high and hard, countering quickly whenever they regain the ball. Already, they’ve found several different routes to goal. This is the Austin way, and when it works well it’s something to be admired by all fans.

3) Support: Austin FC has received the most incredible support so far this season. From a plane flying a banner prior to their opening match, to the hundreds of flag-waving, instrument playing, song singing contingent that showed up in Colorado and the handful who ventured all the way to Los Angeles (twice), Minnesota, and Kansas (it would have been more were it not for restrictions those clubs imposed on the number of away fans), the support has been remarkable.

The Verde Store at Q2 Stadium has a steady stream of supporters not only willing, but eager to part with their hard-earned cash in exchange for jerseys, scarves, tees, and anything else that carries an Austin FC logo that will represent their love for their new team. It’s almost impossible to enter a grocery store or go out for a meal in the city and not see someone sporting something Verde. Fans are entitled to complain when they think their team is performing below par. Austin’s fans are no different.

But so far, their criticism of their team has in no way dampened their enthusiasm for it. And they haven’t even played a home game, yet.

4) The Kids are Alright: Austin FC’s commitment to their youth Academy was established early and with absoluteness. Claudio Reyna, in particular, has been heavily vested in supporting Academy General Manager Tyson Wahl and his team. Speaking with Last Word on Soccer earlier in the year, Wahl said of Reyna, “It’s kind of remarkable to me because his core responsibility right now is helping form the first team, but he’s still super aware of a lot of young players all around the country. He’s very interested, very passionate, and very supportive of the Academy program”.

The influence of Reyna and the effectiveness of Wahl and his team have been evident in the U13, U14, and U15 results. Austin even put the highly lauded FC Dallas Academy to the sword. So, it was little surprise when the club recently announced their expansion from three to five teams (there’s that number again), spanning U12 to U17. Four of the five age groups will compete in the prestigious MLS NEXT system. Wahl has made no secret of the clubs’ desire to see at least one Academy player graduate to the first team every season. With the commitment Austin FC has already shown to youth soccer in central Texas, who would bet against them?

5) ‘Trust the Process’: It seems to be the club mantra. You hear it from Josh Wolff. You hear it from team ownership. You hear it from the players. Rome wasn’t built in a day. Austin FC might take a little longer than that, too. The club may only be five games into their existence, but they have a great foundation. They have a solid roster – with room for both improvement and recruitment.

They have a beautiful new stadium and world-class training facilities. They have a wildly enthusiastic fanbase. And those in the know clearly have a defined process that they believe in. If everyone associated with Austin FC trusts them to execute that process, it’ll be fascinating to see what might be achieved this season.

The post Takes Stock of Austin FC Five Games Into the Season appeared first on Last Word On Soccer.