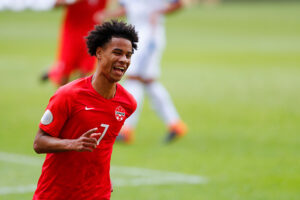 Tajon Buchanan (who currently plays for the New England Revolution) was the star in Canada’s first Concacaf Olympic qualifying game. They started off their 2020 Concacaf Men’s Olympic Qualifying Championship with a 2-0 win over El Salvador. They were also able to get the clean sheet against El Salvador.

New England’s Tajon Buchanan played a big role in Canada’s win over El Salvador. He scored the only two goals of the game and played extremely well. In the 17-minute, Buchanan made an excellent shot with his left foot past the goalkeeper for the 1-0 lead. Four minutes later, Buchanan scored his second goal of the game. The game at the time was 2-0 Canada with only 21 minutes played in the game.

Tajon Buchanan also played well in the second half as well. He also set up Ballou Tabla with a terrific pass, who had a glorious chance to score early in the second half. He also made positive plays off the ball and was by far their best player today.

James Pantemis gets a clean sheet against El Salvador

James Pantemis, the CF Montréal goalkeeper played a big game for Team Canada. What people may not know is that El Salvador had more shots on goal than Canada. However, Pantemis was able to save all eight shots on goal against El Salvador. Some of his big saves took place in the 32-minute and the 64-minute of the game. In the 64-minute, Pantemis saved a tricky shot from Enrico Dueñas of El Salvador.

“I thought James had an excellent game, I thought he had a lot of experience in our team, in our environment, he was with us with Toulon, he was there in January, he was there at other senior camps”

Mauro Biello, in French, on the play of James Pantemis#CanM23 #CMOQ

Pantemis has really made a name for himself in this game. He has only played three games for the Montreal Impact (now CF Montréal). Expect great things from this goalkeeper in the future.

Good defence in the second half

However, in the second half, it was a different story. None of the shots threatened the goalkeeper. A big reason for that is the little things. For example, Canada’s passing percentage was 93 percent while El Salvador’s was only 81 percent. Passing is also relevant in offence and the midfield. However, with a high passing percentage, it decreases the possibility of a turnover in the defensive end.

This was a positive win for Canada. They did not give up a late goal and got a clean sheet. The last time Canada’s U-23s did not give up a goal in a game was in the 2012 Concacaf Men’s Olympic Qualifying Championship. They got a clean sheet twice in that tournament with a scoreless 0-0 draw against El Salvador and a 0-2 win over the United States of America. This will be something to watch out for as Canada looks to qualify for their first Olympics since 1984.

Buchanan became the 12th #CanM23 player to score a brace in Concacaf Men’s Olympic Qualifying, the first since Toss Ricketts in 2008. https://t.co/lo7QpydZuW

Revolution’s player Buchanan will be a player to watch. He probably has the eyes of the Canadian men’s national senior team after his performance against El Salvador. Canada will now face Haiti on March 22 at 6:00 p.m. ET. This is while El Salvador will face Honduras at 8:30 p.m. ET. Both games will take place at Estadio Akron in Zapopan, Mexico. Lastly, both games will also be shown on OneSoccer, which is a subscription-based streaming service.

The post Tajon Buchanan the star of the game against El Salvador appeared first on Last Word On Soccer.