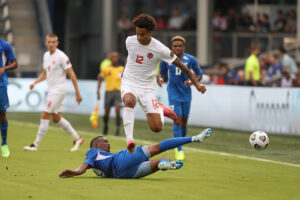 PREVIEW – New England Revolution teammates Tajon Buchanan and Matt Turner will be on opposing teams on Sunday. Turner made his debut for the USMNT back in January. Buchanan also made his senior men’s debut against Aruba in March. Both of their debuts came this year.

Tajon Buchanan and Matt Turner Set to Face Each Other

Tajon Buchanan might be the best player for CanMNT right now. His speed and his ability to get past defenders have played a critical role in his team’s success. He may not have had a goal yet in the tournament. However, he had one assist on Jonathan Osorio’s goal against Martinique on July 11. (a link to the goal for the U.S. viewers). In the same game, he also played a big part in Stephen Eustáquio scoring his first-ever goal for the CanMNT. Also, while Buchanan did not get credited with an assist, he played a big part in Cyle Larin’s first goal in the Haiti game on July 15.

All these goals have something in common. He is able to get past the opposing player’s defence and deliver the ball to his teammates. This is something the USMNT will probably look at and evaluate before their next game against Canada.

“It was a tough game but we stuck together and got the three points. It’s a big game now against the US and something for us to prove against one of the top teams in CONCACAF.” #CANMNT #GoldCup21 pic.twitter.com/1MAiZXdAgK

He was also a big part of CanMNT’s U-23 team. In the first Olympic qualifying game in 2021 for Team Canada, Buchanan scored two goals in a 2-0 win over El Salvador. Buchanan will now look forward to facing the USMNT and Matt Turner to determine the winner of Group B in the 2021 Concacaf Gold Cup.

The starting goalkeeper for the New England Revolution is also the starting goalkeeper for the USMNT at the Gold Cup. He has made three appearances for the USMNT, including two at the 2021 Concacaf Gold Cup. He gave up a penalty goal to Emmanuel Riviere of Martinique. However, his goal against average remains very low at 0.33 according to Jeff Lemieux of Revolution Soccer. He played a big role in the 1-0 win over Haiti. He made four saves and preserved the clean sheet in a tightly contested game.

Matt Turner first played soccer on a lark in his freshman year of high school. He wasn’t recruited for college or drafted into #MLS.

Turner is really an underdog story. He was not recruited by any colleges in the U.S. He has now made 81 appearances for the Revolution this year. One of these games was against New York City FC on June 19, 2021. Turner made seven saves including stopping a penalty shot and helped the Revs win the game 2-3 at Yankee Stadium. This is what current Revs head coach Bruce Arena said about the performance:

“He’s improved greatly,” Arena said of Turner on his Monday video call. “He continues to improve, he works real hard, he’s a good student of the game, a great person. He had a remarkable game in New Jersey the other night. We’re excited the way he’s progressing as a goalkeeper.”

As a result, Turner won the MLS Player of the Week for Week 8 of the 2021 MLS season. He is also a big reason for the Revolution’s success this year.

Cam Pellegrino (@mlsupdateshub): #NERevs‘s Tajon Buchanan and Matt Turner are both shining on the International stagehttps://t.co/GMdJnHSqab

According to Sam Macomber of The Bent Musket, Buchanan and Turner are neighbours in the Revolutions’ locker room.

“I’m extremely looking forward to that game coming up against Matt and hopefully I can score on him,” Buchanan said.

Also, back in March, Turner congratulated Buchanan on making the CanMNT for the World Cup qualifiers. This is what he said:

“Yeah, I’m super happy for him. The kid works really, really hard. We sit next to each other in the locker room, so we’re always giving each other a hard time about USA-Canada stuff. He deserves it. He’s been proving that every time he steps onto the field, especially these last few games.”

What this shows is a camaraderie shared between two players. They want the best for each other despite setbacks the other player may have. In that same article where the quote came from, Turner did not make the USMNT roster for the Concacaf Nations League Finals.

Teammates Set to Play in Different Uniforms on Sunday

The New England Revolution teammates are likely to face each other on Sunday. This is unless the USMNT wants to rest Turner for the knockout stages. It is unlikely, but it could still happen. Buchanan will be one player the USMNT will need to keep an eye on. The USMNT though probably knows about Buchanan’s strengths and weaknesses, as many of their players in the Gold Cup are from MLS.

For Canada, USMNT goalkeeper Turner is in tremendous form. His stellar play could steal a win for the USMNT if the CanMNT has the upper edge in the game. On paper, both teams are at a very similar level. It will be a fascinating game to watch. The last time CanMNT won a group in the Gold Cup was in 2009. They would end up losing in the 2009 Gold Cup quarterfinals 0-1 to Honduras. The last time the U.S. did not finish top of their group was in 2013 largely because of a 1-2 loss to Panama. The Americans would make the finals that year and defeat Panama by a scoreline of 1-0.

The game between CanMNT and USMNT will start at 5:00 p.m. ET on Sunday, July. 18. Just like the previous two games of both countries, the game will take place at Children’s Mercy Park in Kansas City, Kansas. The game will be televised in both Canada and the U.S. on Fox. Canadians can also watch the game live on OneSoccer.

The post Tajon Buchanan and Matt Turner: Friendship Tested at the 2021 Gold Cup appeared first on Last Word On Soccer.