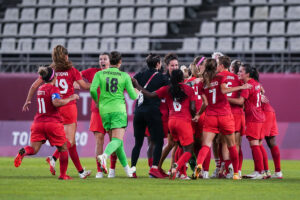 PREVIEW – Both Sweden and CanWNT aim to win the first-ever Summer Olympic gold medal on Thursday. This will be Canada’s first-ever final in the Olympics or the FIFA Women’s World Cup. This is also Sweden’s second consecutive Olympic final appearance. They lost to Germany in the 2016 Summer Olympics in Rio, Brazil.

Sweden and CanWNT aim to make history on Thursday

The CanWNT road to the gold medal game started against host nation Japan. They ended up tying that game 1-1 after Japan scored a late equalizer. They would end up winning against Chile 2-1 and tying against Great Britain by a scoreline of 1-1. The Great Britain game was unfortunate as a shot deflected off Nichelle Prince and went into the back of the net.

The story for CanWNT in the knockout stages has been their defence. They are the only team in the knockout stages to not concede a single goal. This is a credit to players like Kadeisha Buchanan and Vanessa Gilles in games against Brazil and the U.S. Also, Canadian goalkeeper Stephanie Labbé played a big role in CanWNT getting the win over Brazil. This included the whole game, including the penalties against Brazil.

Thanks John, seeing the fruits of your work. Wish you were here to share the moment with us

onto the next one

John Herdman, who is now the head coach of the CanMNT, was the head coach of the women’s side and played a big role in the CanWNT becoming medal contenders. After a disastrous 2011 FIFA Women’s World Cup, Herdman took his team to back-to-back bronze medals in 2012 and 2016. This is what CanWNT captain Christine Sinclair said after the win against USWNT:

“I was just sitting there thinking how proud I am of this team … It’s a very unique group. It’s a special group and I’m so proud to be a part of it.”

Relive the goal that secured Canada’s women’s soccer team in the finals at #Tokyo2020 https://t.co/BmQyRWuVec pic.twitter.com/W2gTwcbOmC

The penalty goal by Jessie Fleming to beat their old foes in the U.S. was beautifully done (link for the U.S. viewers). It went into the top corner and the USWNT goalkeeper Adrianna Franch had no way of stopping it. Credit should also be given to Deanne Rose, who drew the penalty for Canada. This was also CanWNT’s team’s first victory against the U.S. since 2001. CanWNT won that game 3-0. This included one goal by then a young Sinclair.

If CanWNT has the best defence, Sweden might have the best offence in the Olympics. Sweden scored nine goals in the group stage. Yes, Netherlands had a better goal differential in Group F. However, Sweden was in a harder group, which can be considered a group of death. Two of the other three teams in the group, Australia, and the U.S. for example are battling for a bronze medal.

They defeated the U.S. 3-0 and also defeated Australia 2-4 and New Zealand 0-2 in the group stage. This allowed them to finish first in Group G. In the knockout stage, they faced third-place Japan from Group E. Sweden fairly easily dispatched Japan in a 3-1 win. They were the only team to win the game within 90 minutes. They then faced Australia again in the semi-finals. It would be a closer match than the one that took place on the group stage.

Australian superstar Sam Kerr thought she scored the game-winning goal for the Matildas in the first half but was disallowed a goal. Sweden would immediately respond with a goal in the second half via a fortunate deflection from a Filippa Angeldal shot. However, Fridolina Rolfö took advantage and put the shot into the back of the net. Australia kept pressing but was unable to get a goal. This is what Angeldal said about making the final:

“It is amazing, I am so happy,” said Angeldal, “I think we learnt a lot from this game, we worked so hard as a team and we will have to bring that to the final.”

Also, the fact that they got a clean sheet shows the defensive strength that Sweden possesses. It will not be an easy game, but Sweden will be considered favourites to win against CanWNT. Their leading goalscorer is Stina Blackstenius with four goals followed by Rolfö with three goals.

Head-to-head matchups and familiarity with each other

Lastly, it is important to note that Labbé plays with Damallsvenskan club Rosengård in Sweden. So, a lot of the Swedish players will be familiar with Labbé and vice versa. The important thing for CanWNT is to score the first goal of the game. Sweden has never trailed in the Olympics, so putting them under pressure will be a great way to try to win the game.  The games have historically been fairly close between the two teams.

CanWNT also faced Sweden twice in the Summer Olympics. The first was in 2008, where the CanWNT lost 2-1. They faced each other again in the 2012 Olympics, where both Canada and Sweden tied with two goals each.

Friday, watch Canada face Sweden for the Olympic Gold Medal at 8am ET / 5am PT on CBC! #CANWNT pic.twitter.com/FoKDVVbTwg

Unfortunately, this game will be difficult for CanWNT to win. It was not a big surprise that CanWNT defeated the U.S. based on previous games in this Olympics. However, Sweden might be the best team in the tournament as they won all five of their matches in regulation time in the Olympics. Sweden though will find it difficult to break CanWNT’s defence.

The game takes place at International Stadium Yokohama in Yokohama, Japan. The game will be televised nationally in Canada on CBC at 8:00 a.m. ET on Friday, August. 6. Both Sweden and CanWNT aim to win their first-ever Summer Olympic medal in women’s soccer.