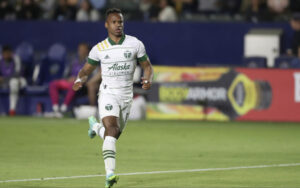 The day has finally arrived, MLS fans. Strap yourself in, buckle your seatbelts, take a seat on the couch — but get ready for chaos. MLS deadline day is here, and some moves have already been made around the league and abroad.

The highlight of MLS deadline day has been Jeremy Ebobisse to the San Jose Earthquakes and Sam Vines being traded to Royal Antwerp in Belgium. Matt Pollard covered the Vines move, which you can read about here. We will update this article as more trades and transfer are being made.

Ebobisse has been with the Timbers for the entirety of his senior professional career. He was an MLS SuperDraft pick in 2016, and spent a bit of time on loan with the Charleston Battery. However, Ebobisse has primarily featured for the Timbers since 2016 — and has over 20 appearances for the USL affiliate, Timbers 2.

Last night, after their 1-1 draw with San Jose last night — in which Ebobisse did not dress — Timbers head coach Giovanni Savarese commented on the trade.

“He’s a player that means a lot to us. He’s a player that I saw grow in the club; he’s a player that’s very dear to all of us,” Savarese said. “I think sometimes, there’s decisions that are made and not always on agreement. This league sometimes, as well, has somethings in regards to the way salaries… have to be managed. That makes it difficult as well. I will let the club make an announcement and that’s it.”

Tenorio also reported that Ebobisse will sign a new contract with San Jose. The deal has not yet been made official from each side.

All details of the Sam Vines transfer to Royal Antwerp in Belgium can be found in Matt Pollard’s article.

Nicolas Benezet could be on the move to Seattle. The Colorado Rapids Frenchman has been rumored to join the Sounders, which has been reported by his agency Agence Kemari. According to the agency’s tweet, he will join the injury-riddled Sounders through the rest of the 2021 season.

Our client @NicolasBenezet has accepted an offer from @SoundersFC to join them until the end of the season.

Very exciting opportunity for Nico, with the chance to join the best franchise in @MLS and fight for the title

Benezet has bounced around throughout his career. In the United States, Benezet joined Toronto FC on loan in 2019 from Guingamp. He returned to the second-tier French club in 2020, but then joined the Colorado Rapids. In 1.5 years, Benezet has made 22 appearances for the Rapids. According to MLS, he has only started once this season. Benezet began his senior professional career in France with Nîmes Olympique in 2010.

The attacking midfielder could be a benefit to the Sounders, who are expecting Nicolas Lodeiro to return to 90 minutes in the coming weeks.

There seems to be a common theme with these trades. Just like Ebobisse, Florian Valot has been traded to the team that his former club played on Wednesday night. However, Valot — unlike Ebobisse — did dress against FC Cincinnati. He just wasn’t used as a substitute.

Valot, a 28-year-old midfielder from France, has been with the Red Bulls since 2016, when he originally joined Red Bulls II. He was promoted to the first team in 2018, making over 40 appearances. Before his journey to the United States, he featured in his native France for AS Monaco II from 2010-13. He went to college at Rider University in New Jersey for three years.

The LA Galaxy are putting a lot of faith in former Frankfurt striker Dejan Joveljić. The 21-year-old has signed a 4.5-year contract through the 2025 season. Joveljić began his senior career with Red Star Belgrade in his native country. However, in 2019, he went to the Bundesliga and joined Eintracht Frankfurt.

He only featured for Frankfurt four times, spending most of his time on loan. In 2020, he was on loan with Belgian first-tier side R.S.C. Anderlecht. In the same year, he journeyed to Austria and went on loan with Wolfsberger AC where he made 34 appearances and scored 18 goals.

“Dejan is an exciting, goal-scoring forward who is amongst the brightest talents in Europe,” LA Galaxy General Manager Dennis te Kloese said, via a press release. “We are thrilled to welcome Dejan to Los Angeles and look forward to his contributions to the club.”

According to the Galaxy, Joveljić was signed as a an MLS U22 Initiative player.

In the words of @FabrizioRomano…