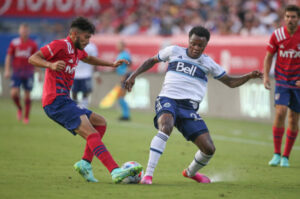 FRISCO, TX – Both the Vancouver Whitecaps and FC Dallas have had a struggling start to their 2021 campaigns. Both are coming off impressive performances against high level competition. Both find themselves at the bottom of the Western Conference standings. So naturally, this was a game that both sides needed in order to gain some traction this year. FC Dallas were riding a 14 year unbeaten streak on the fourth of July ahead of this one, with Vancouver keen on playing spoiler.

Vancouver lined up in what’s quickly becoming Marc Dos Santos’ favourite formation in a 4-3-3. Only one change from Vancouver’s 2-2 draw last week in Seattle, as Michael Baldisimo made way for MLS SuperDraft pick Javain Brown. Neither Jake Nerwinski or Bruno Gaspar were fully fit for this one, hence Brown’s selection. On the other side, Christian Gutierrez lined up as the only left back on the Caps following the contract termination of DP full back Ali Adnan Saturday.

For Dallas, their starting 11 remains unchanged following their 2-1 surprise win over New England. Ricardo Pepi came off of a performance where he scored a brace, so the 18 year old was an easy choice for Luchi Gonzalez’s starting squad.

Vancouver Rose to the challenge

FC Dallas started off the faster of the two teams out of the gate, dictating the first 25 minutes of the contest. Vancouver’s Max Crepeau pulled off a number of stellar saves to open up the game, however Vancouver’s “bend but don’t break” mentality soon broke.

A clash in the centre of the park left Caio Alexandre in a heap and multiple Whitecaps voicing their concerns to referee. Jesus Ferreria was left with plenty of space and played an inch perfect ball into Pepi for his fifth on the year. Centre backs Andy Rose and Eric Godoy were caught playing catchup to the youngster who blitzed through the middle to finish the chance.

However it seemed as though that was the kick Vancouver needed to get a foot in this game. A few half chances but nothing too fruitful until Alexandre pounced on a stray pass in midfield in the 30th. Dajome was sent down the right wing and flung in a cross to Lucas Cavallini in the middle. The effort fell short, however Bressan was unable to deal with the ball and Cavallini swiftly rounded keeper Jimmy Maurer.

Fresh off of Vancouver’s first first half goal of the season, the squad rallied to build on the momentum. Crepeau was still kept busy, however the score remained level deep into stoppage time. Given recent stoppage time heartbreak against Real Salt Lake and LA Galaxy, it must have felt sweet to see Andy Rose leaping through the air to head home Dajome’s cross and send his team to the dressing room up 2-1.

A slow and sluggish second half for both teams found this game minutes away from wrapping up a 2-1 win. Multiple attacking substitutions for Dallas, multiple defensive substitutions for Vancouver. As time crept on and Vancouver sat back deeper, Dallas kept pushing for the equalizer. A cross to the back post caused too much for Vancouver to deal with as Ranko Veselinovic headed the ball past Crepeau and into the side netting.

The goal was the fourth in as many games conceded by Vancouver in stoppage time, and proved to be the final push in this game as it finished 2-2.

FC Dallas face high flying LA Galaxy on Wednesday, meanwhile Vancouver plays their temporary hosts Real Salt Lake in an effort to get back on track.