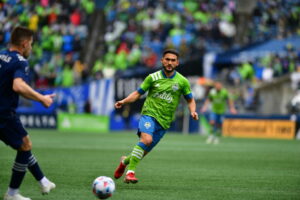 The Seattle Sounders and Sporting Kansas City have no lost love for each other. These two sides have duked it out for Western Conference titles and have been neck-and-neck for the first-place spot in the West this year. If you were to ask fans who some of the top teams in Major League Soccer are, Sporting and the Sounders would certainly be immediate answers.

That rivalry was on full display at Lumen Field on Saturday afternoon. Tim Melia and Cristian Roldan were the highlight reel portion of the game, not any of the goals. Roldan seemingly backed into Melia — in which he got a yellow for — and Melia, frustrated by the U.S. men’s national team player’s presence, wrapped his arm around Roldan, throwing him to the ground.

Instantly, cries for a red card echoed the Lumen Field crowd and the Sounders bench.

However, referee Ismael Elfath elected only to show a yellow to Melia. According to the Sounders Communications Staff, pool reporters submitted questions to PRO Referee on the incident.

Tim Melia with some WWE moves and fighting moves… not sure how he isn’t given a red card here. How he isn’t even given a yellow is beyond me.#SEAvKC | 0-1 pic.twitter.com/bN6NPUiVjB

After the match, Cristian Roldan said he wants to hear from Elfath, Howard Webb and thought VAR was not used properly. “It’s frustrating because I felt I had good positioning,” Roldan said. “I didn’t hear a whistle until the ball was cleared out and I was shoved to the ground.”

“I think referees have the toughest job. They don’t get enough credit,” Roldan said. “But at the same time, we as players get frustrated… There’s a lot of emotion. That’s why we feel VAR is so important.”

As everyone expected, the match was going to be chippy. However, that moment was more than just competitive play from this match. In total, five Sounders players were given yellow cards, while three Sporting players were also booked.

It was a busy day for Elfath.

Brian Schmetzer: “Normally players cannot throw another player on the opposition down. That’s one singular play… I thought Cristian had position. He didn’t really jump for it. Referees make the decision and we live by the decision.” #Sounders | #MLS | #SEAvKC

Sporting KC “cleaner” in front of net than Sounders

Johnny Russell was the Sporting Kansas City player who sent the dagger for the game-winning goal. Russell has now scored in his last seven games for Sporting, breaking his own club record.

Russell picked up a pass from Roger Espinoza — who recently married Kansas City NWSL midfielder Lo’eau LaBonta — and slotted his chance past Stefan Frei. However, Sporting got on the board first courtesy of Rémi Walter in the 4th minute.

Seattle opened up their account in the 58th minute, as Nico Benezet scored his third Sounders goal.

With three games left this season, Seattle now holds a narrow first-place Western Conference lead with 58 points. Sporting Kansas City are right behind with 55 points. On Tuesday, Seattle will hit the road and face LAFC at 10:30 PM EST. Meanwhile, Sporting will take on the LA Galaxy on Wednesday night at 8:30 PM EST.

The post Sporting KC top Seattle Sounders at home, 2-1, with plenty of yellows appeared first on Last Word On Soccer.