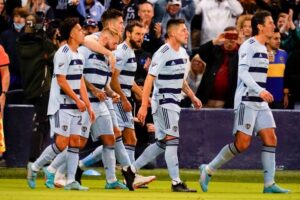 KANSAS CITY – On a night when the club marked multiple milestones, Sporting Kansas City snapped a two-match losing streak with a 1-0 win over Real Salt Lake. Sporting controlled a majority of the possession and clamped down on the few chances RSL managed to create.

“I’m always interested when a team gets into a situation where we were,” manager Peter Vermes said, after the match. “We had a lot of injuries and how the reaction of the guys winds up being and how some people panic and then others keep their head. Just because you’re losing doesn’t mean you’re lost. We weren’t lost at all. We were just trying to get a routine and trying to get a bunch of guys still indoctrinated (in the team’s style of play) that still need time.”

Forwards Johnny Russell and Daniel Salloi made their way back into the lineup after having missed time with injuries. Salloi looked to make an instant impact and put a shot just wide in the opening minute of the match.

According to possession statistics on MLSsoccer.com, there were only two five-minute periods of the match Sporting did not have the majority of the possession: the second period of the first half (43.6 percent to 56.4 percent) and the last period of the match (28.8 percent to 71.2 percent). In fact, in three five-minute stretches in the first half, Sporting’s possession was around 80 percent.

One reason Sporting had as much possession as they did was RSL’s poor passing accuracy. Sporting had a respectable 78.2 percent passing rate, but RSL’s accuracy was down to 64.7 percent. Those numbers decline further when broken down into passes in the attacking half (50.9 percent) and the final third (50 percent).

Sometimes, all you need to get things going in the right direction is a little luck. That’s what Russell got when he scored the game-winner in the 81st minute, putting the ball past Zac MacMath and into the bottom left corner of the net.

After the game, Russell said, “We got a bit of luck. I tried to play a through ball to Khiry (Shelton) and a little bit of a ricochet straight back to me, but it’s about time we get a goal like that. I feel like a lot of teams get goals like that against us and we always seem to have to carve a team open to get a goal like that. So from that point of view, it was nice.”

The goal was the club’s 400th at Children’s Mercy Park across all competitions since the stadium opened in 2011.

Goalkeeper Tim Melia made his 200th regular season appearance, becoming the first goalkeeper to reach that milestone. “Tim has been a very steady goalkeeper here for the last number of years,” Vermes said. “He came in as someone who was, in a lot of people’s eyes, he was way beyond his career. And in the latter parts of his career, he’s made it a career. So credit to him and he works hard. He’s a humble guy and he cares about the team. Those are all reasons why he’s been good and consistently good.”

Sporting KC returns to the road for their next match. The club travels to Vancouver for a tilt with the Whitecaps. The match will be available locally on KMCI-TV and streamed on the Sporting KC app, SportingKC.com, and ESPN+.