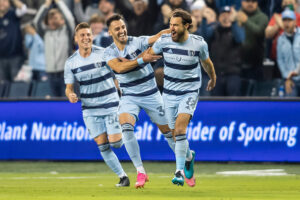 KANSAS CITY, Kan. – Vanni Sartini’s guarantee of victory over Sporting KC didn’t come to fruition. In fact, it didn’t come close to being true. It was Sporting KC early and often, as they saw out a 3-1 win against the Vancouver Whitecaps.

Sporting Kansas City was winless in games that follow a break of 10 days or more in 2021. Not anymore. Sporting KC took the game to Vancouver for the first 10-15 minutes or so of the match, then they started to drop off and invite Vancouver onto the front foot, opening up large gaps in the middle of the field for players like Gadi Kinda, Daniel Salloi, and Graham Zusi to exploit.

The first Sporting KC goal came directly on the right to left diagonal, with Graham Zusi launching the ball forward to Daniel Salloi who exploited the space between full-back and center back. Salloi launched it back and Zusi slotted it across the face of goal to make it 1-0.

A flukey play resulted in a penalty kick for Vancouver when Luis Martins handled the ball in the box. A clear as day penalty was in fact reviewed at Children’s Mercy park and after VAR pointed to the spot, Christian Dajomé slotted home. Right before the halftime whistle, a Sporting KC corner kick was headed around the box and fell at the doorstep for Isimat-Mirin to tap home from close range and make it 2-1.

Then, Graham Zusi turned back the clock with an absolute screamer from distance.

We’ve seen Zusi do this before.