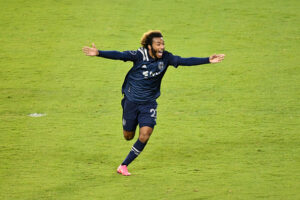 KANSAS CITY– When Gianluca Busio was subbed off the field for the USMNT in their 1-0 win against Canada in the CONCACAF Gold Cup, it was potentially the last time he sets foot on the field at Children’s Mercy Park. Sporting KC announced Thursday evening that they have transferred Gianluca Busio to Venezia F.C. of the Serie A for a club-record fee.

According to Paul Tenorio of The Athletic, Sporting KC will receive $6.5 million upfront, and another $4million in bonuses, bringing the total package up to $10.5 million, as was reported by Taylor Twellman after that USMNT match against Canada. Sporting will keep a 20% sell-on clause and other incentives could drive that number higher.

“Gianluca has embodied all of the core values we look for in a player,” Sporting Kansas City Manager and Sporting Director Peter Vermes said. “He has consistently put the team first while demonstrating tremendous professionalism and an unwavering commitment to improving his game and helping the club win. Gianluca is a special talent with outstanding character, and we wish him nothing but the best at Venezia.”

The young midfielder came into his own over the last calendar year. After not making the most of his opportunities at the MLS is Back Tournament, Busio came back to KC with a vengeance, and urgency to never let another opportunity go. He grew up a lot, and turned into one of the league’s premier deep-lying playmakers. He took on the number 10 jersey at the club, and started the 2021 season on fire, earning himself attention both nationally and internationally.

Multiple teams were in on Busio, and Sassuolo for some time looked like the most likely landing spot. Until reports came out that Venezia, the American owned upstarts recently promoted to Serie A for the first time since 2002 were set to offer a greater package. In addition, clubs like Fiorentina, and most of the big guns kept tabs on Busio, but never submitted formal offers. One other club in Belgium was serious about their interest in the young man, but that club’s name never came to light.

“This is a very proud moment for me and my family,” Busio said. “I’d like to thank everyone who has made it possible, especially all the people at Sporting KC who have helped me become the player and person I am today. Sporting will always have a special place in my heart and I’m grateful to have started my career at such an amazing club. The people, the fans, the city—everything about Kansas City was perfect and it will always feel like home. This is the next step in my career and I’m really excited to join Venezia.”

Busio was brought to the Sporting KC academy by way of North Carolina. Sporting scouted him through a loophole in the academy system, as there were no MLS clubs who had territorial rights over North Carolina, making it a free play for Sporting. The efforts in scouting in North Carolina have turned up Kaveh Rad, Jaylin Lindsey, and Rad’s younger brother Jahon, who plays for Sporting KC II. Oh, and Busio.

Earlier in the afternoon, Sporting KC announced the acquisition of Jose Mauri, an Italian-Argentine midfielder who will provide depth at the main positions that Busio occupied. For now, the plan for Sporting KC will be to move Ilie into the defensive midfield role, with Remi Walter and Mauri as depth options in that position as well.