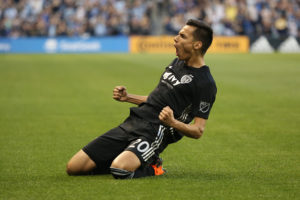 KANSAS CITY – Sporting Kansas City will take on Orlando City in their home opener of the 2020 season. Orlando played to a goalless draw with their southern soccer rivals, Atlanta United, while Sporting KC out red-bulled the Red Bulls in a 2-1 road victory to start their season. Our Sporting KC  preview gets you caught up on all the notes and nuances as Sporting KC takes on Orlando on prime-time, national T.V.

Since it is early in the year, we don’t have a whole lot of Orlando City tape. I decided to cash in a “phone a friend” and reached out to Julia Poe, who covers the Orlando soccer scene for the Orlando Sentinel. Not only is she the Orlando beat writer, she grew up in Kansas City giving her a great insight and understanding as to how these two match up. Here is our Q&A to better get to know the opponent:

A: Andrés Perea was a gamechanger in the Lions’ home opener against Atlanta United when he came in as a second half substitute. Without Mauricio Pereyra in the No. 10 position (he’s serving the second match of a red card suspension) Perea is likely to fill in that role as a stabilizing force for the attack. Meanwhile, Matheus Aiás and Tesho Akindele are the forwards most likely to step up with Pato sidelined. Aiás is a hungry young striker who’s been bullish on fighting for a starting position, so he could be poised for a big night leading the top of that attack.

Q: Last season, Orlando’s backline handled the physical challenge that Khiry Shelton brought to them pretty easily. Obviously trying to beat that back line with physicality isn’t something that works, so what does? What would that kryptonite be for them?

A: The main challenges for the backline right now are injuries as starting centerback Robin Jansson and starting leftback João Moutinho are both out with injuries. Kyle Smith and Rodrigo Schlegel filled in seamlessly last week, but this will be a step up for them as they face a disciplined attack on the road. The left side of the backline might be more vulnerable as a result as the pair get accustomed to one another.

A: Pareja is always going to be defensive minded, but he’s balanced that with an emphasis on energetic attack in Orlando. The basis for that balance comes from the midfield, which features players like Júnior Urso and Sebas Méndez who can glue (you’ll hear Pareja use that word a ton) the defense with creative attackers like Chris Mueller. Although Mueller and Nani receive plenty of well-earned accolades for their talents in the attacking third, it’s this connection through the midfield that really fuels the Lions’ ability to bring a more well-rounded vision to the pitch.

A: In my opinion, this game comes down to the midfield. Pareja talked about the movement of the Kansas City midfielders and their energy occupying the central third of the pitch. If the Lions lose the momentum and get pinned back into their own defensive third, they could fall victim to aerial set pieces, which were a slight weakness in 2020. On the other end, the Lions are unlikely to see more than a handful of chances, so they’ll need to capitalize on early opportunities to score — something they struggled with in the home opener.

Q: What’s a general prediction for the match?

This is going to be a really fun matchup. We saw that when the two teams met last season — these games are high energy and explosive end-to-end. Without Pereyra and Uri Rosell (a familiar face for KC fans) managing the midfield, the Lions are going to be challenged to control the pace of the game, so they’ll need Méndez and Urso to step up in that area. If they can get Mueller or Nani going on the goal-scoring end, this will be an important step to get the team on the right foot to start the season.

Given what we were able to see in training this week, I’m not sure if Pulido or Russell are going to start. They will only start if they can handle 60 minutes, and it just doesn’t seem like they’re there yet. Besides, they had some really good link up play down the right with that squad. Given the weakened left side of the back line for Orlando, I wouldn’t be surprised to see Sporting go with this and pull Pulido and/or Russell on around the 60th minute. Everything else is pretty self explanatory.

Sporting are missing some key players, and so are Orlando. But Sporting KC is usually pretty amped up for their home opener and I expect nothing less. Sporting wins 3-1.