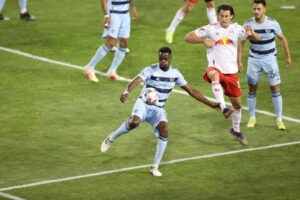 HARRISON, N.J. – Sporting Kansas City got off to a great start to their 2021 campaign, earning a 2-1 victory on the road over the New York Red Bulls, thanks to goals from Gadi Kinda and Daniel Salloi. The win is Sporting KC’s 15th opening day win in club history, taking the lead for most opening day wins of any club in MLS. Here are five thoughts from the opening win as Sporting KC defeat RBNY

Daniel Salloi is going to be a factor on the scoresheet

To expect him to match his xG rate seems to be a bit much. However, the truth is always somewhere in between when it comes to someone’s best and someone’s worst. So, five goals for Daniel seems like a safe expectation.

Saturday’s goal was Daniel getting on the end of a ball that he was not getting on the end of during the 2019 season. That’s the difference. If we see more of that from him, you’re certainly going to see something of his real capabilities. He has a knack for being in the right place at the right time and finding pockets of space. He has striker instincts on the wing, and it’s going to result in him getting his chances. Whether or not he continues to finish them is the key to Salloi’s longevity with the league. Side note? Contract years usually bring out the best.

The newcomers are very, very good.

Sorry, that was a lot about Daniel Salloi. Let’s take a look at some of the other key players. Remi Walter and Nicolas Isimat-Mirin made their debuts tonight and looked the part. There was one key sequence in the first half that stood out to me for Remi Walter.

Sporting had turned the ball over just entering their offensive third of the field. RBNY was looking to break as Walter had pinched up high and wide, and everyone else seemed to be not anywhere close to the middle. There was a giant gap of space for the RBNY midfielder to play the ball forward, and Walter burst back, took the ball off the RBNY attacker, played the ball out of trouble, got it back, and jump-started the attack all in about three seconds. It was something Sporting KC hasn’t really had in the midfield since Felipe Gutierrez last stepped on the field.

For Isi, the play that stood out probably seems so simple, but in the first half, there was a quick break from RBNY where Jaylin Lindsey had been caught further forward in the attack. It was a 1v1 in the wide channel between Isi and the RBNY attacker. In the past few years, Botond Barath, Graham Smith, or Roberto Puncec probably would’ve left the ball alone, making sure that their positioning was decent and squared up waiting to bring on the RBNY attacker 1v1.

Flash forward to tonight, mind you, RBNY had yet to be in possession of this ball. Isi got off the jump quickly, made his way almost to the touchline, and put the ball deep into the Red Bulls defensive third. Danger gone.

It seems like such a simple thing, but it was an aggressive read on a play that turned into a well-developed counterattack against Sporting KC all too often over the last few years.

Fontás is good when he’s healthy

Andreu Fontás is a lot better than people give him credit for. An injury hampered him severely in his debut season, and in limited moments of 2020, he proved he could be a reliable option off the bench. Tonight’s performance for him was massive. The Spaniard made a few crucial interceptions, especially a deflection on a square ball across the front of goal that looked like it was destined for Caden Clark to tap home.

Better yet, he and Mirin seemed to work really well in tandem with each other. John Pulskamp said as much in his post-game press conference.

“They’re both amazing on the ball,” Pulskamp said. “They were winning balls in the air left and right tonight. They really make my job easy as a goalkeeper. I think they work amazingly together. Both have similar minds – really good minds for the game. I think those two as a pair are going to be really good this year.”

One of the things I think back upon is how we saw Fontas play in 2018 when he first started with the club: it was sans Matt Besler, as the left-center back, with a physical and athletic partner who read the game with a high soccer IQ (then it was Ike Opara). I came away from those limited appearances thinking “wow, yeah he’s not too bad. What a nice pick-up.” Then 2019 happened and a large portion of the fanbase was ready for Sporting KC to use their once-a-year buyout on him because he didn’t perform well for a multitude of reasons.

But Fontás got healthy and is proving he has the ability to be a first-choice center back. He is also doing so in the role he never would’ve been able to if Matt Besler was there (as the left-sided, ball-playing CB). Time will tell if this is going to be a big year from Fontás, but that opening performance should encourage you.

Sporting KC’s depth was on display early on in this season. Sporting was missing six first-choice starters for this opening match. Amadou Dia, Tim Melia, Johnny Russell, Graham Zusi, Ilie Sanchez, and Alan Pulido all were absent from the Starting XI.

Yet Sporting KC went out with their attacking-mid starting at striker and a 19-year-old debutant in goal. They snagged a victory from a second-half deficit, on the road, in one of the hardest places to win in the league.

It was mightily impressive and shows the depth that Sporting KC may be able to pull from as fixture congestion, injuries, and international duty come up across the board.

Sporting KC will take on another Eastern Conference opponent, hosting Orlando City in their 2021 home opener on Friday, April 23 with kickoff set for 7:55pm EST, on FS1.