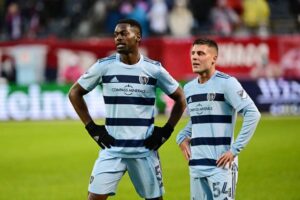 CHICAGO, IL – Sporting Kansas City lost their third road match of the season on Saturday, a 3-1 setback to the Chicago Fire at Soldier Field. The visitors fell behind 2-0, managed to pull one back, but another midfield turnover led to the Fire’s third, putting the match out of reach.

Peter Vermes’s sides have, for the most part, played a 4-3-3 formation for quite a while. With six attacking options out injured, Vermes switched to a 4-5-1 (a 3-5-2 with the ball) for Saturday’s match with the Fire. Nikola Vujnovic started as the lone forward, while defenders Ben Sweat and Kortne Ford earned their first start for the club.

One of the early signs that it wasn’t to be Sporting Kansas City’s day came in at the half-hour mark. A turnover in the midfield led to an early goal for the home side. Xherdan Shaqiri quickly fed the ball ahead to Fabian Herbers, who found Kacper Przybylko out on the left. Przybylko’s shot skipped under both Ford and goalkeeper Tim Melia and into the back of the net. Melia was visibly frustrated as he makes that save 99 times out of 100.

Kacper Przybyłko gets on the board.

His first @ChicagoFire goal gives his team the lead.

Shortly after halftime, referee Timothy Ford pointed at the spot to award a penalty to Chicago for Ford’s foul on Mauricio Pineda in the 18-yard box. The contact, however slight, was there. The controversy comes from what happened shortly before that. It appeared that Przybylko made much more obvious contact with Sporting defender Andreu Fontas immediately preceding the foul on Pineda. As the penalty was given, it was not able to be reviewed by VAR for being a clear and obvious error, but it’s another instance where the officiating in the league isn’t always consistent. Shaqiri stepped to the spot and doubled Chicago’s lead.

Sporting Pulls One Back

A few minutes after Chicago made it a two-goal game, Sporting put together a good team goal. Cameron Duke fed the ball down near the end line to Felipe Hernandez, who one-timed it to Roger Espinoza, who one-timed it past goalkeeper Gabriel Slonina and into the net. It was Espinoza’s first goal of the season and the first goal Slonina had allowed.

He’s still got it

Chicago Puts The Game Away

With less than 10 minutes left, Sporting players pushed forward to try and snatch an equalizer. Unfortunately for them, Chicago managed to nick a third goal and put the game out of reach. After corralling a header from a long goal kick by Slonina, midfielder Remi Walter lingered a little too long on the ball facing his own goal and had it poked away from behind. Chicago’s midfield took advantage of their numerical advantage and Przybylko slotted home in the 82nd minute to make it 3-1.

Have a night, KP!

“We kept pushing forward but, credit to them, they defended very well,” Espinoza said. “We’re a team that likes to possess the ball and there were times when we did that. We need to keep doing what we did that at the end tonight. We needed more of that. When we kept the ball, we created some chances and that was one of the reasons why the goal came.”

“I think our team actually played well,” Vermes said after the game. “We were organized. The guys did a great job with us changing the team around a little bit. Obviously, a lot of guys were missing, and a lot of guys were playing in different places today, but they did a fantastic job. I don’t think the score line justifies it by any means. The guys actually played really well with that kind of mentality, attitude, work ethic, and competitiveness in the game. It’s very positive and reassuring for me as we move forward.”

Sporting KC will return home to take on Real Salt Lake on Saturday, March 26. Kickoff is scheduled for 6:00 p.m. and the match will air locally on KMCI-TV and nationally on UniMas and TUDN, with streaming available on Twitter. WHB-AM (810) will carry the English radio broadcast, while KDTD-AM (1340) will carry the game in Spanish.