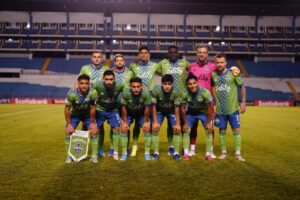 The Seattle Sounders opened up their 2022 campaign with a lackluster 0-0 draw in Honduras. Concacaf Champions League kicked off earlier this week and the Sounders took a trip to Honduras to take on FC Motagua. Both teams scrambled to find shots on goal but were unable to put anything into their respective nets.

Seattle rolled out a formation that fans will be excited to see throughout the upcoming year. Up front, Raul Ruidiaz took the top spot in the 4-2-3-1 formation. Right behind him were lethal attackers: Jordan Morris, Nicolas Lodeiro and new acquisition Albert Rusnák. The front three did not find a goal, but looked to make a few chances.

Of course, Rome was not built in a day, and the four attackers will improve their chemistry into the MLS season.

Seattle took six shots, with only one registering on goal to threaten Motagua goalkeeper Marlon Lincona. On the other side, Motagua had four shots on goal, keeping Sounders goalkeeper Stefan Frei busy. Seattle also lost the advantage on set-piece plays, only having two corner kicks compared to Motagua’s five corner kick chances.

After the match, Brian Schmetzer, Sounders head coach, said that it’s harder for a team to gel offensively than defensively.

“We’ll watch the film and work on some final third movements to be a little sharper,” Schmetzer said post-game. “That’s a big, tall, athletic and strong team. They were well organized, especially in the first half. It wasn’t easy… I wouldn’t call Motagua inferior. They’re well coached and they work hard. I think the final action, the final shot, was missing tonight.”

Of note for the Sounders was the decision to start 16-year-old Obed Vargas in the midfield. Meanwhile, another Sounders Academy product Jackson Ragen made his Concacaf Champions League debut. Nouhou returned from winning a bronze medal with Cameroon in the African Cup of Nations and entered the match in the 64th minute for Lodeiro.

See you back at @LumenField for Leg 2 next week!

What’s next for Seattle?

The Sounders will have a busy week next week with CCL matches and the start of the MLS season.