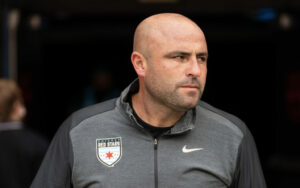 On the latest Soccer 2 the Max Podcast, Sean Garmer, Rachael Kriger and Erik Watkins discuss the closing of the transfer window. Also, NWSL news broke late in the podcast about Christy Holly being fired as the Racing Louisville head coach. In happier NWSL news, too, Scott Parkinson was named the Gotham FC head coach, with Beverly Yanez being tabbed as assistant coach.

Rachael’s headline was mentioned above, with Parkinson and Yanez being named the Gotham head coach and assistant coach, respectively. She discusses how the choice is a good one and give the green light to Parkinson’s new tenure and job. Sean takes a moment to highlight Cristiano Ronaldo going back to Manchester United and Erik — a Manchester United fan — talks about Kylian Mbappe staying at PSG.

What We Watched this Week

Rachael and Erik have similar stories this week: Mexican soccer at its finest and chaotic nature. Erik highlights a Liga MX match between Querétaro and Puebla that had some extra grit, and Rachael discusses Liga MX Femenil and how Toluca was doing so well against Tigres, until giving up three goals in the last 10 minutes. Sean watched bits and pieces of action.

How we feel about our Squads?

Sean discusses how Manchester United had a tricky and confusing VAR moment to earn a narrow win over Wolves. Erik talks about his MLS teams, D.C. United and Orlando City SC. And to close the show, Rachael talks about how cool it was to see OL Reign beat the first-place Portland Thorns at Lumen Field for the first time.

About Soccer 2 The MAX

A Podcast about the world’s game from an American perspective. Each episode includes headlines, topics, and discussions that can be about anything that happened that week in Soccer, Futbol, or Football. And there are also thoughts on the team’s Sean Garmer, Erik Watkins and Rachael Kriger each support, games they watched that week, and more. There will also be special editions focusing on the United States Men’s and Women’s National Teams, and other European or American league matches from time to time as well.

Being born into a Latino family, Sean grew up around the game of Futbol. No matter what you deem to call it, Mr. Garmer enjoys the sport. Sean played Defender growing up and then transitioned to Goal Keeper in High School. Due to the University of North Texas not having a Men’s Soccer team at the time, his playing career ended in 2005.

However, since then, he’s kept up with Soccer by watching his favorite teams and leagues, while also writing as well. Sean was paid to cover the 2010 World Cup, formerly hosted the Football 2 Futbol Podcast, and also wrote about the beautiful game for several other outlets. He mainly follows Major League Soccer supporting his childhood team in FC Dallas. Sean’s also a Manchester United Supporter after visiting England in 2003 and picking the Red Devils.

While he was never really the best on the field, Erik’s always had a deep-rooted passion for the beautiful game. From discovering it in Maryland thanks to DC United to cheering on Manchester United since the days of Ruud van Nistelrooy. Not to mention, considering donning purple hair to cheer Orlando City SC today. From MLS to USL and NASL (Viva Armada!) to even dreaming of training and playing in the MASL, if it’s soccer, he’s usually on it.

Rachael Kriger is a men’s and women’s soccer journalist for Equalizer Soccer, Last Word on Soccer and is the Communication Director for the N.A. Soccer Reporters. She currently lives in Ocala, Florida, where she is the youth minister at Blessed Trinity Parish. However, her hear will always stay true and loyal to her beloved home of Pittsburgh, Pa., and her birth city of Moscow, Russia. Follow her on Twitter, @RachaelKriger.