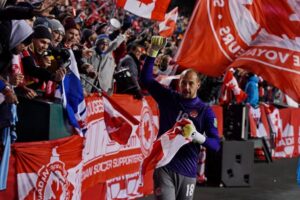 PODCAST – A super eventful 8th round of CONCACAF World Cup qualifiers gave us so much to talk about. Canada bests Mexico 2-1 on a frigid night in Edmonton to get 16 points and now Canada leads World Cup Qualifying thanks to this huge result. The game had drama from the 1st minute until the 95th minute and so much happening in-between too.

Elsewhere, the United States Men’s National team only manages a draw at The Office in Kingston, Jamaica as once again some Michail Antonio magic helps the Reggae Boyz pick up another point, as the USA suffers yet another lackluster showing away from home. Considering the US have more away games left than home games, is there a way to solve this problem?

Sean Garmer and Erik Watkins go through the talking points and performances from both of the big games on the night. Plus, a customary trip around CONCACAF sees things get even tighter at the top and another squad creates a small window of distance from the other squads at the bottom. There’s plenty to talk about as it is past the halfway point in CONCACAF World Cup Qualifying.

Discussing the CONCACAF World Cup Qualifying Table as it stands, the way through for the top teams, and if Costa Rica and Jamaica have a shot at making a run.

For more on the game and other CONCACAF World Cup Qualifying results be sure to check out written recaps for USA vs Jamaica, Canada vs Mexico, and Panama vs El Salvador too.

Soccer 2 the MAX is a podcast about the world’s game from an American perspective. Each episode includes headlines, topics, and discussions that can be about anything that happened that week in Soccer, Futbol, or Football. Plus, a weekly Manchester United segment, and thoughts on the squad’s Sean Garmer and Erik Watkins support too.

Sean Garmer: Being born into a Latino family, Sean grew up around the game of Futbol. No matter what you deem to call it, Mr. Garmer enjoys the sport. Sean played Defender growing up and then transitioned to Goalkeeper in High School. Due to the University of North Texas not having a Men’s Soccer team at the time, his playing career ended in 2005.

However, since then, he’s kept up with Soccer by watching his favorite teams and leagues, while also writing as well. Sean was paid to cover the 2010 World Cup and has also written about the beautiful game for several other outlets. He is a supporter of several teams all around the world, but his two major loves are FC Dallas and Manchester United.

Erik Watkins: While he was never really the best on the field, Erik’s always had a deep-rooted passion for the beautiful game. From discovering it in Maryland thanks to DC United to cheering on Manchester United since the days of Ruud van Nistelrooy. Not to mention, considering donning purple hair to cheer Orlando City SC today. From MLS to USL and NASL (Viva Armada!) to even dreaming of training and playing in the MASL, if it’s soccer, he’s usually watching it.