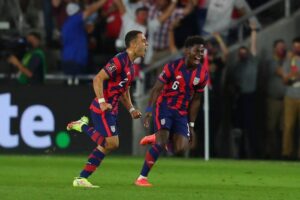 COLUMBUS – The United States Men’s National Team hosted Costa Rica in Columbus, Ohio on Wednesday night. It was the first USMNT match played at the brand new Lower.com Field. Los Ticos were coming off a comeback win against El Salvador and were looking for a big road point in Concacaf World Cup Qualifying. The USMNT needed a bounce back result after a disappointing loss at Panama.

Berhalter made several big changes going into this match. Zack Steffen started in goal. The Robinsons returned to the backline. Ricardo Pepi and Tim Weah were in the front three.

Keysher Fuller shocked the home side 60 seconds in. Ronald Matarrita got a cross into the box. Fuller arrived late and knocked it down to beat Steffen to the far corner. The play appeared to be offside but Sergiño Dest kept the play onside, having run past the end line.

Dest made it 1-1 on a spectacular play in the 25th minute. The USMNT were knocking the ball around in the final third. Yunus Musah found Dest at the top of the box. He took a touch towards goal then blasted the ball into the top corner.

The half ended 1-1 with the U.S. having the better of the play for 30 minutes. Goalkeeper Keylor Navas had to be subbed off at halftime with an injury for Leonel Moreira.

The Yanks had much of the ball to start the second half, but struggled with the final product. Brendan Aaronson and Weston McKennie both had chances. The first dangerous opportunity came to Bryan Ruiz when Miles Robinson’s pass was picked off. Robinson made an intense defensive run to intercept Ruiz and prevent a shot.

Tim Weah created the breakthrough in the 66th minute. Building out of the back, Fuller deflected the ball to Dest who found Weah in space in the box. Weah shot near post. The ball took several bounces including off the post and goalkeeper before rolling across goal and over the line. The play was ruled an own goal on Moreira.

The Americans dominated the final 20 minutes in possession and chance creation. Pepi had two good looks at goal. Francisco Calvo nearly committed an own goal.

SERGINO DEST WHAT A GOAL

Destiny: It was about time Sergiño Dest had a signature attacking moment at the international level. He’s been criticized heavily for only being able to attack in WCQ. His quality finally showed up on the score sheet and in a critical result.

Showing their age: Los Ticos were conservative in this game, even having scored in the first minute. They’ve got an experienced but aging core. Their age showed in their third game in a week.

Confidence restored: What a week USMNT Twitter has had hot take wise. Two home wins is a success. They move back to the top of the table.