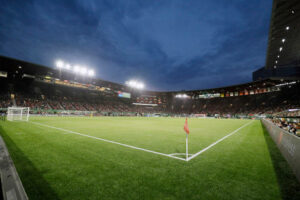 PORTLAND – Portland Timbers hosted Colorado Rapids in a midweek MLS match on Wednesday night. The Timbers were coming in on a three-game winning streak. Colorado were unbeaten in eight. Bill Tuiloma made an uncommon start at right back. It would not go well for the Kiwi as he forced a 10-man Timbers to dig deep.

The first half was even with both teams creating chances. Colorado built out of the back. Portland was effective through transitions through Sebastian Blanco. They also had a few good looks on set pieces.

Blanco had a breakaway 11 minutes in, making a perfectly timed run between the center backs. Goalkeeper William Yarbrough came off his like to make the close range save. Jonathan Lewis should have opened the scoring seven minutes later with a shot inside the six yard box. Andre Shinyashiki found him in tight spacing, but he couldn’t get the shot on target.

Larrys Mabiala had the best set piece chance in the 35th minute. After a corner, Dairon Asprilla in front of goal, but he couldn’t find the inside of the near post.

The match turned on its head just before halftime. Bill Tuiloma was given a second yellow card after a sequence that saw him step on Mark-Anthony Kaye’s ankle then scissor tackle Braian Galvan. Armando Villarreal reached for the back pocket without hesitation. Tuiloma had previously been cautioned for a tactical foul on Galvan.

Portland began the second half in a defensive posture, in a 5-4-1 at times. Colorado had trouble breaking them down, finally breaking the deadlock on 64 minutes. Kaye and Shinyashiki combined well to set up Lewis right in front of goal. This time the striker did not miss, hitting the back of the net.

The Timbers would show resilience, answering a minute later. Blanco sent a free kick in from midfield. Dario Zuparic did well to get a touch to it, squaring for a wide open Mora who headed the ball into the back of the net. It was the first header goal Colorado conceded this season.

Portland were spurred on by the home crowd and at times where the better team down a man with the score line 1-1. Colorado would however retake the lead on a crazy goal in the 87th minute. He took the ball to the end line and chipped it to the far post. The ball went off the crossbar, off the post and in.

The Timbers once again showed fight in the face of adversity, equalizing on the first minute of stoppage time. The match ended 2-2.

How did that one go in?!

Michael Barrios scores from the tightest of angles

10-man Timbers fight and draw: What a display of resiliency by this 10-man Timbers team. They found a way to grind out a result and at times were the better team than Colorado in the second half. Great performance by Blanco.

Another tight result in the West: There’s been some big games recently shaking up the standings in the MLS Western Conference. Portland is back in the race to qualify while Colorado has dropped points in two straight games. They have begun to fall behind Seattle and Portland.

Lewis now just a starter: Jonathan Lewis has developed a bit of reputation of being a super sub and not being a 90 minute player. He’ll start well in games but fade and get subbed out. It was good to see him score in the second half after a poor first half.