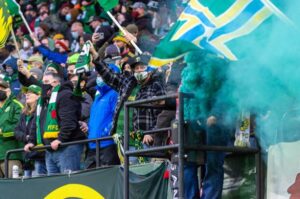 PORTLAND – Portland Timbers hosted Minnesota United FC on Sunday afternoon in the first round of the MLS Cup Playoffs. While the Loons got off to a good start, they were defeated on the backs of a Sebastian Blanco brace.

After sustaining a few attacks from the home side, Minnesota opened the scoring with a great sequence on transition. Robin Lod and Romain Métanire combined to get forward. The fullback then squared the ball to Franco Fragapane for a tap in.

It was virtually all Timbers for the rest of the half. After several periods of pressure, they made it 1-1 on a corner. Claudio Bravo crossed the ball into the box and Larrys Mabiala rose up to score with a header. The half ended tied.

Portland picked up where they left off, scoring barely a minute into the half. Minnesota’s backline delt with a cross but no defender pursued the ball. It fell to Blanco who shot first time on the half volley, burring it in the bottom far corner.

Blanco got his brace on 66 minutes. He got the ball 15 yards from the top of the box, dribbled into space, and uncorked a shot that got past goalkeeper Dayne St. Clair.

The tempered flared with five minutes to go as Fragapane committed a late challenge on Diego Chara for a yellow card. Given the force and the stomp that took Chara’s legs out from under him, it could have been red. Players from both teams gathered to exchange pleasantries. Mabiala and Joseph Rosales were given cautions for their actions during the scrum.

Minnesota felt aggrieved just before that as VAR checked a potential handball on Dairon Asprilla but it was not given nor did it lead to a monitor review.

Playoff Blanco: This game was going to come down to which attacking front four executed. Within that, this game came down to which star, Reynoso for Minnesota and Portland’s Blanco, would shine. Sebastian Blanco was spectacular in this game, leading his team to victory.

Did the Loons score too early? Possibly. They weren’t the better team through 11 minutes when they scored, but they defended and absorbed too much pressure after scoring. Other than a few chances for Lod, they did almost nothing between their goal and Portland making it 3-1.

Portland plays Pidsgiving: The Timbers will now have three days to rest up before heading to altitude to play in the first Thanksgiving Day match in MLS history. It will be a tough test, as they drew and lost their two games against the Colorado Rapids in the regular season.