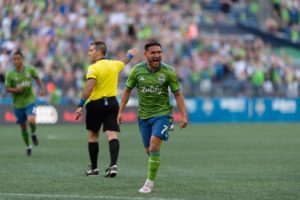 Seattle took the lead through Christian Roldan who got on the end of a Brad Smith cross. How the ball got to Smith was a theme of the night for Sporting KC: misplayed clearances. Sporting KC had the majority of the ball on the night with their possession rate nearing 65%.

They turned the ball over in their defensive and middle third of the field far too much for any Sporting fan’s liking. If you watched the second goal back you might have heard Yakkity Sax playing in the background as Will Bruin’s header somehow bounced in after botched clearance attempts, bad headers, and Melia being a little out of position. The comedy of errors made Sporting KC look like they were in for a long evening. Johnny Russell though found the back of the net just shortly after the goal though and gave us an interesting final 30 minutes. However, Sporting KC could not find a winner and Seattle escaped Kansas City with all three points.

The post Seattle Sounders win in Kansas City for the first time since 2013 appeared first on Last Word On Soccer.