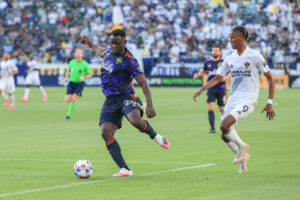 The Seattle Sounders have a history of starting off slow and finishing strong. This year’s tale of the tape has been different. Right now, the Sounders are the only team in MLS that has never lost a match. And, only midway through the season, the Sounders lead in the Supporters Shield race, albeit by one point.

The Sounders have six wins and three draws, with the latest victory coming against the LA Galaxy. The two sides have already met earlier in the season, back in early May, with the Sounders picking up a 3-0 win.

In last night’s meeting, the Sounders saw 21-year-old defender Abdoulaye Cissoko make his debut. He featured for 87 minutes before coming off for Danny Leyva. It was the day of defenders for Seattle, as Yeimar Gomez Andrade scored his first Sounders goal of 2021. Gomez Andrade had two goals last year.

Gomez Andrade scored off a corner kick to equalize the match. Sacha Kljestan scored for the Galaxy to give them the lead in the 21st minute. Javier “Chicharito” Hernández won the foul inside the box to win the penalty. Heading into halftime, the score was even at 1-1.

In the second half, Raúl Ruidíaz added to his goal-scoring tally of 2021, now totaling seven goals in nine matches. Ruidíaz, in the 49th minute, picked up the rebound from Galaxy goalkeeper Jonathan Bond’s save on Cristian Roldan’s shot. Ruidíaz, right in front of net, struck the ball in goal for the game-winning goal.

The Sounders victory gives them a four-point cushion in first place in the Western Conference against second-place Sporting Kansas City. Seattle has 21 points, although there are plenty of games left to go.

Three Takeaways from Sounders vs. Galaxy

What’s next for Seattle?

In a quick turnaround, the Seattle Sounders will be taking on Real Salt Lake at 10 PM EST on Wednesday night at Lumen Field. Then, Seattle will remain at home on Saturday against the Vancouver Whitecaps at 9 PM EST.

As for the Galaxy, Greg Vanney’s men will look to rebound on Wednesday against the Whitecaps at 10:30 PM EST. On Saturday, a rivalry will be renewed when the San Jose Earthquakes take on the Galaxy at 10 PM EST.

The post Seattle Sounders edge out LA Galaxy on the road with 2-1 victory appeared first on Last Word On Soccer.