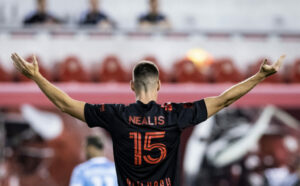 New York won a penalty in the second half, but Klimala rolled his effort wide. Nealis scored the winner in the 87th minute, stunning the Columbus crowd. The Red Bulls are now unbeaten in eight, winners of their last four games in a row.

The Crew made numerous changes to the team that drew 1-1 at Nashville this past Wednesday. Josh Williams was scratched due to lower back tightness, while Vito Wormgoor and Jonathan Mensah were the center backs. Milton Valenzuela earned the nod over Waylon Francis at full-back, partnering Steven Moreira on the other flank. Marlon Hairston partnered Darlington Nagbe in midfield. Meanwhile, Miguel Berry led the line over Gyasi Zardes — supported by the formidable attacking line of Etienne, Zelarayan and Santos.

Per #Crew96 spokesperson, Josh Williams was a game-day scratch from the squad due to lower back tightness.

New York make a few tweaks to the side that beat NYCFC last Sunday. Tom Edwards returned to the side and replaced John Tolkin at wing-back, Kyle Duncan was the other wing-back. Sean Davis and Dru Yearwood have been a successful formula in midfield and once again started together. The big miss: Omir Fernandez was out due to a hamstring issue, meaning Patryk Klimala was alongside Fabio up top.

The Red Bulls scored inside the opening seven minutes. From a corner kick, Casseres Jr. got past his marker to head in from close range. Edwards with the service, New York hits the front.

Columbus tied it up through Miguel Berry. The cross served into the box and Berry got on the end of it to tie the game, Moreira with the assist on the cross. Both teams would pray for a second but the halftime whistle blew in a fun opening frame.

Multiple shots from both teams, big chances converted. New York held the edge with set pieces and nearly scored a second goal. Only one booking, Klimala who kicked the ball away after a whistle.

Second Half: Sean Nealis wins it for the Red Bulls

Wikelman Carmona entered the match for Tom Edwards. Minutes into his introduction, he won a penalty for the Red Bulls. Klimala stepped up, hesitated and rolled his effort wide of the net. It was a huge let off for the Crew.

Dru Yearwood was booked for a foul in midfield. Alexandru Matan replaces Etienne and Liam Fraser replaced Hairston in a Crew double sub. John Tolkin came into the game for Fabio.

Kyle Duncan had his shot saved from point blank range, while Carmona nearly scored but sailed hit effort high of the goal.

New York took a late lead through Nealis. The cross into the back post was headed by Klimala onto the path of Nealis who flicked it past Room. In the 87th minute, stunning the Columbus crowd. Tom Barlow entered the match for Klimala in the final minutes.

Frankie Amaya entered the game for Casseres Jr. Bradley Wright-Phillips also entered the match, and headed an effort wide of the far post.

The Red Bulls earn a statement win. It felt as though the game might slip away from them after the Klimala penalty miss. But they kept fighting to win in Columbus for the first time since 2015. Nobody would’ve expected Nealis to win this game, but win it he did. They are now above the playoff line.

Stick a fork in the Columbus Crew. Another loss, this one the most crucial. Games against Orlando, DC United and Chicago are a daunting task for a team now five points below the line. It’s too little too late for the reigning champs in a season they’d like to forget. What a collapse.

Nobody wants to play the Red Bulls. Eight games unbeaten, four-game winning streak, another road win. One of the in-form teams in the league, Gerhard Struber has got this team hitting on all cylinders at just the right time.