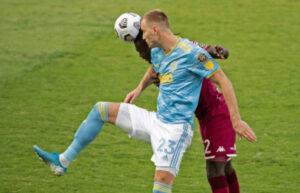 Recap – The Round of 16 rolled on in the Scotiabank CONCACAF Champion League. This time out it was MLS’ Philadelphia Union, on the road against Costa Rica’s Liga FPD’s Deportivo Saprissa. While the football was mostly beautiful, there was some ugly to close out an intense first leg.

Philadelphia Union Hold On For SCCL Round of 16 Win

The Union opened the first leg of the Round of 16 in rare fashion, with their entire starting XI making their first ever CCL starts.

The majority of the first half was even keeled. With both sides doing what they could to keep possession, without compromising position to the counter attack. However, in the 34th minute Philadelphia put together art, to take the lead. A perfect cross from Olivier Mbaizo found Kacper Przybylko right in front of goal for a powerful header to take the lead. The Union would take the one goal lead into the break, putting them in prime position of advancing past the SCCL Round of 16, with a critical away goal.

The second half started in typical CONCACAF fashion, chaotically. From the off Deportivo Saprissa made it clear they weren’t going out without a fight. Though at the time, nobody thought it meant literally. Saprissa had their best efforts thwarted in the 70th minute. A corner kick led to a perfect attempt at goal that would’ve leveled proceedings had it not been for Kai Wagner’s clearance off the line.

Philadelphia defender, Matthew Real, earned a hard yellow for a foul on Ricardo Blanco in the 75th minute. That would not be forgotten, and in the final moments of the match, with Deportivo assured a loss, Blanco retaliated. While the referee gave him a yellow card for his troubles, he was arguably deserving of the red. The match ended with both teams entangled in a shoving match, with a total of five yellow cards awarded at the end.

The Union debuted their new powder blue lightning kits, and also debuted a beautiful style of soccer. With on-point passing for the majority of the match, it never felt like the Union lost control of this match. While the goal was the highlight of the night, it was the build-up all match that impressed. For a team that was playing in their first SCCL match, in the Round of 16, on the road, they never looked lost in the moment. They had a plan, and executed it well.

The aforementioned shoving match, especially the tackle that preceded it, were the lone lowlight of the evening. In what had been a physical match throughout, things got of hand near the end. While the Matthew Real tackle on Blanco was rough, it did not warrant the response it got. The tackle from Ricardo Blanco in the final moments of the match was as nasty as could be. Filled with intent, and while he received a yellow card, his actions called for a straight red.

This was a big win for Philadelphia. Not only did they get a win, they got the always important away goal. They now take a one goal lead into the second leg at home. They also get to carry this momentum into the MLS regular season, where they hope to put together a season worthy of a playoff berth and possibly another Supporter’s Shield. The second leg of the SCCL Round of 16 takes place April 14th.
Embed from Getty Imageswindow.gie=window.gie||function(c){(gie.q=gie.q||[]).push(c)};gie(function(){gie.widgets.load({id:’M5bXOM1dRqNNQSZ1yrQWXg’,sig:’9p6pSSRFhKqvW_FjEWb0e_t_Xs1Kj-8_TI3TLr893B4=’,w:’594px’,h:’385px’,items:’1232169078′,caption: true ,tld:’com’,is360: false })});

The post SCCL Round of 16 Recap: Union Hold Strong appeared first on Last Word On Soccer.