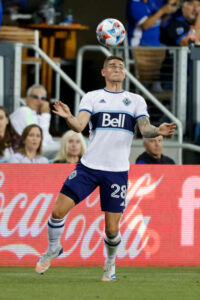 A day circled on the calendar for every soccer fan in Vancouver. 539 days after losing 3-1 to Sporting KC on Opening Day 2020, the Vancouver Whitecaps were home in front of fans. A long, grueling, devious challenge, spanning three host cities, came to a spectacular conclusion under the roof of BC Place on Saturday. Vancouver, unbeaten in seven, hosted a struggling LAFC side.

The squad sent out by Marc Dos Santos to face the home fans remained unchanged from Wednesday’s 2-1 win over Austin FC. Deiber Caicedo, Brian White and Javain Brown were dressed and ready to make their BC Place debut. Designated Player Ryan Gauld is still to crack the starting lineup for Vancouver since he arrived from Farense despite making the MLS Team of the Week on Thursday. Russel Teibert is no stranger to BC Place, as he slots in with Janio Bikel and Leo Owusu to complete the midfield. The ever rotating carousel of centre backs seems stuck on Andy Rose and Ranko Veselinovic, making their third consecutive start together in place of an injured Eric Godoy.

As for Bob Bradley’s side, Jose Cifuentes slides into a more conventional midfield three alongside Latif Blessing and Eduardo Atuesta. Kim Moon-Hwan replaces Tristan Blackmon along the back line in front of Tomas Romero. Former Whitecap Jordan Harvey was on the bench for this one. Winless in six, Bradley relied on his more dynamic and progressive midfield to help the Black and Gold.

If at first you don’t succeed…

Try and try again. That was Bob Bradley’s motto to his front three prior to kick off. Max Crepeau has been phenomenal for Vancouver, and he brought that same form into the opening 45. A number of impressive saves kept Vancouver in this one, despite the onslaught of chances for the Californians. Vancouver managed to create a couple of chances with the help of a slippery field at BC Place. However it would be LA to break the deadlock.

It took 47 minutes of first half play to do, but the “bend, don’t break” mentality finally broke. Janio Bikel brought down Brian Rodriguez on the edge of the box. After a lengthy VAR review, LA were awarded the penalty. Diego Rossi wrong footed Crepeau and LA took the 1-0 lead into the break.

A pair of changes at halftime for the hosts saw Michael Baldisimo and Ryan Gauld injected into the slow (albeit progressive) midfield trio. And it paid off. Brian White got on the end of a cross from Dajome and Vancouver found themselves level.

It would take until late once again for another goal to be scored. This time for the hosts. This time it was Gauld. A Cinderella Story come true on the turf of BC Place. Having had his home debut goal been credited to White, this time there was no doubt. A cross into the six yard box from Ryan Raposo found the Scotsman and he tucked it past Romero.

RYAN GAULD OFF THE HEADER!

Vancouver continues it’s unbeaten run to eight and climbs within win of a playoff spot. The Whitecaps host their former landlord in Real Salt Lake next Sunday, however travel to Vancouver Island on Thursday to take on CPL’s Pacific FC in the Canadian Championship.

LA’s winless skid continues as they prepare for the Battle of LA next weekend against the high-flying Galaxy.