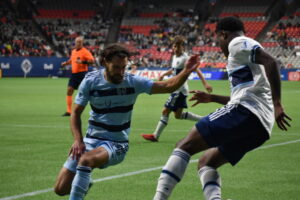 Spanning several years, clashes between the Vancouver Whitecaps and Sporting Kansas City have developed into a sort of rivalry. Yes, Vancouver has Seattle and Portland, while Sporting have Real Salt Lake and Houston Dynamo. But this fixture always feels a bit different. Going way back to 2011, Vancouver clawed back with 3 goals in the final 10 minutes to secure a point. 2018 saw a 9-man Whitecaps squad fall 6-0 at Children’s Mercy Park. There was the penalty shoot-out drama at MLS is Back, last year’s playoff fixture. It always seems to be a spectacle when these two meet. So when Kansas City marched into BC Place on Saturday afternoon, nothing less than fireworks were expected.

Vanni Sartini has stuck resiliently to a three at the back system, despite not having much luck through the opening four games (0-1-2). So naturally, the wild Italian manager stuck to his guns and trotted out a 3-4-1-2, with shades of last season’s second half magic. Tristan Blackmon, Ranko Veselinovic and Jake Nerwinski played infant of Thomas Hasal in goal. Javain Brown and Ryan Raposo were the surprise starts on the flanks, with Russell Teibert and Sebastian Berhalter playing in the middle. Ryan Gauld and Brian White both made their first start of the season due to injuries, alongside Deiber Caicedo to complete the 11.

Raposo, Gauld, Caicedo & White are IN! @RyanRaposo7‘s 1⃣st ever start at BC Place

Peter Vermes is also rather predictable, with his classic 4-3-3. Ben Sweat, Andreu Fontas, Nicolas Isimat-Mirin, Graham Zusi, and of course Tim Melia, completed the defence. Remi Walter, Oriol Rosell and Felipe Hernandez made up the midfield trio. Khiry Shelton paired with a duo that has caused Whitecaps fans headaches for years, Johnny Russell and Daniel Salloi up top.

The first half, while very even and open, didn’t generate that much to write home about. A few chances sent wide of the post, a handful of crosses that couldn’t find their man, and a pair of yellow cards for Javain Brown and Russel Teibert.

Vancouver did well in the centre of the park, considering they were out-manned 3-2 in the midfield. However it was down the flanks where the team found success. Ryan Raposo and Javain Brown linked very well with the front three who were excellent off the ball. A few more chances were generated, however both Hasal and Melia refused to be beaten. And that remind true. For 73 minutes at least.

A long switching ball from Lucas Cavallini found Ryan Raposo at the corner of the box. A simple lay back to Michael Baldisimo before a chipped through ball return fell dangerously inside the six yard box. Both Cavallini and Raposo were on the end of it, however it was the young winger Raposo who got the final touch on it to give the Whitecaps a lead with his first goal in the MLS.

Raposo’s tally would be the only goal in the match, despite a handful of late chances from both sides. Vancouver claimed their first win of the season and did so in front of their home fans. It was always going to be a difficult opening stretch for Vancouver, given their strength of schedule. Now their focus turns to the Portland Timbers making the trip up the I-5  on Saturday.

For Sporting Kansas City, their up and down start continues to an injury riddled 2022. Next Saturday sees Nashville visit Children’s Mercy Park, with a chance to reel in a playoff spot before too much separation occurs. It’s a long season to go still, which is something that both of these teams are being reminded of. However at the end of the day, it would be Vancouver’s first 3 point outing of the year, a first goal for Ryan Raposo, and the first step towards reclaiming some of that magic that we all saw at the end of last year.