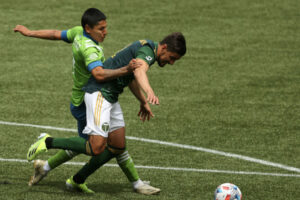 Portland, Oregon — It’s never a true Cascadia rivalry match without some chaos. The Seattle Sounders hit the road to take on the Portland Timbers at Providence Park — just a day after the stadium hosted the NWSL Challenge Cup Final.

Seattle, coming off a massive win against the LA Galaxy, fought hard with the Timbers and left Portland with three points.

The first half was a back-and-forth contest. Each side seemed sluggish to start, picking up momentum as time went on. However, in the second half, all the chaos — err, action — ensued. In the 55th minute, Timbers forward Jeremy Ebobisse won a penalty in the box, drawing a foul by Shane O’Neill. Longtime Timbers veteran Diego Valeri lined up for the kick.

Stefan Frei made the save, but the referee ran over to the VAR booth after an encroachment from Nouhou. That mean Valeri had one more chance. He was unlucky the second time, too, hitting off the post. Valeri did pick up his rebound and put it in the net, but since no other player touched the ball, the goal was called off.

Valeri was soon brought out of the match. Not long after Valeri’s substitution, Timbers goalkeeper Jeff Attinella was subbed off after a no-contact injury. He was stretchered off and 6’7 goalkeeper Hunter Sulte — who is only 19 — came on as the fifth and final sub.

Meanwhile, for the Sounders, Raul Ruidiaz took the lead with a penalty conversion, which he won. For the second goal, Fredy Montero put the ball past Sulte in the 79th minute — only seven minutes after entering the match for Will Bruin.

Portland did pull one goal back, preventing a clean sheet for Seattle, with a free-kick goal by Bill Poni Tuiloma. Sounders substitute Jordy Delem gave up the foul.

What’s next for the Sounders?

San Jose is coming off a 2-1 victory against Real Salt Lake from Friday night. MLS legend Chris Wondolowski scored twice while Rubio Rubin scored off a clinic of a bicycle kick.

The post Ruidiaz, Montero lead Seattle Sounders past rival Timbers, 2-0, on the road appeared first on Last Word On Soccer.