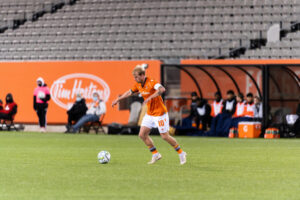 HAMILTON, ON – Rómulo Otero scored the goal that gave Cruz Azul the win at Tim Hortons Field. It was not the most convincing of wins, but they got their important road goal against a resilient Forge FC side.

Full Game Summary:#ForgeFC played well but did not get a shot on goal.

Rómulo Otero’s goal in the first half gave #CruzAzul the win.

Terran Campbell was just offside after a good run in the fourth minute. Forge started the game with a good attack. There was a good defensive play by Hamilton in the ninth minute. Aboubacar Sissoko then made a great defensive play in the 10-minute. Both teams did not have any clear-cut chances to score in the first 14 minutes of the game. Tristan Borges shot was just over the bar in the 24-minute. That shot was probably the best chance of the game for Hamilton.

31’ #CruzAzul scores! Rómulo Otero scores from a set-piece and takes advantage of a mistake made by #ForgeFC goalkeeper Triston Henry! #OneSoccer#FORvCAZ | 0-1 | #SCCL22pic.twitter.com/vwgJ4ie28l

Rómulo Otero’s goal came off a set-piece. It bounced weirdly on the Tim Hortons Field turf. Forge goalkeeper Triston Henry was caught off-guard, and the ball went over him. As a result, Cruz Azul took the lead late in the first half. Kyle Bekker had a great chance to score in the 41-minute, but his shot went wide. Lastly, Ignacio Rivero made a good clearance of a Borges corner kick. Bekker then had a hopeful shot that was also off-target.

Cruz Azul started the second half of the attack with two-straight corners. They also had a big chance to score. However, the receiving Cruz Azul player could not get good contact on the ball.  Cruz Azul’s shot was off target. Hamilton’s pass was not good, and Cruz Azul intercepted the ball in the 77-minute. Woobens Pacius’ header was off target.  Alexander Achinioti-Jönsson made a terrific defensive tackle to keep Hamilton in the game. Pacius pass went to the most recent substitute from Cruz Azul. The Mexican team almost scored again in the 88-minute, but the shot went on the wrong side of the net. Rafael Baca got a yellow card in the 90-minute, as he brought down Pacius.

This game was always going to be difficult against Cruz Azul. Hamilton may be accomplished in the Canadian Premier League, but a lot of these teams are well-established.

Game is Over: @ForgeFCHamilton 0@CruzAzul 1#ForgeFC played well in what was another historic game at #TimHortonsField and also historic for the #CanPL. However, Rómulo Otero’s goal for #CruzAzul was the difference as Hamilton was unable to get a shot on goal.

The defence of Forge FC was also impressive. Hamilton only allowed Cruz Azul one shot on target each in the first and second half. They also did not give Cruz Azul many goal-scoring opportunities. If it was not for the easy goal allowed in the first half, Hamilton would have gotten a historic tie against a six-time champion in the Concacaf Champions League.

Cruz Azul will travel to Toluca to face Deportivo Toluca F.C. The game will take place at Nemesio Díez Stadium at 7:05 p.m. ET on February 20. They will then face Forge FC at Estadio Azteca on February 24. The game will take place in Mexico City and will be shown live on OneSoccer at 8:30 p.m. ET. As Hamilton’s CPL season does not start until April, they have more than a full week to prepare themselves for the game in Mexico.

“We keep on increasing the standard and it just shows the trend of where Canadian soccer is going,”#SCCL22 l @ForgeFCHamilton

A special day for the Canadian Premier League and Tim Hortons Field. No matter the result, this game will be remembered for a very long time. This is because this is the first-ever Concacaf Champions League game that had a Canadian Premier League team. While Hamilton did lose the game, they played admirably. They were also the best team in the first half even though they gave up a goal. It is also becoming a trend for Hamilton to host big games. Hamilton hosted the CanMNT when they won 2-0 at Tim Hortons Field over the USMNT.

Cruz Azul gets the result. It was not the prettiest of games. The OneSoccer commentator was saying that Cruz Azul was taken aback by Hamilton’s speed in the first half. It also does not matter if they did not deserve the win even though they played better in the second half.