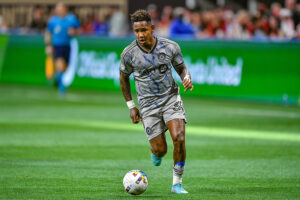 HARRISON, NJ – Romell Quioto stepped up as CF Montreal came from behind. CF Montreal won their second game of the season and their second straight win after coming back to beat the New York Red Bulls on the road in Harrison, New Jersey at Red Bull Arena.

Another slow start for Montreal

Five minutes in both teams were trying to set the tone for the game as the visitors went looking for that first scoring opportunity. 12 minutes in the Red Bulls were dominating in possession with almost 70 percent as they were putting immense pressure on the Montreal defence.

Two minutes later New York opened the scoring as Omir Fernandez off a counter-attack took a shot from distance but the ball went off Rudy Camacho’s foot and deflected into the back of the net. 20 minutes in Montreal had yet to register a shot on target and it looked like they were struggling on offence.

Djordje Mihailovic had a great chance in the 33-minute with Montreal’s first shot of the game but it went off the far post and stayed out. Montreal started putting pressure on New York and Kamal Miller was able to test the keeper Carlos Coronel but he was able to make the save.

The first half finished with the visitors down by one and 45 minutes to try and come back and win their second game of the season.

Montreal pulls off a late comeback

Five minutes into the second half New York started to regain control of the game and had a couple of good chances to double their lead but Sebastien Breza was there to make the key saves when needed and CF Montreal looked like they were on the backfoot.

The Red Bulls kept pressing and it seemed like Montreal was out of sync failing to create any scoring chances so far 15 minutes into the second half. Wilfried Nancy made his first change of the game in the 61-minute bringing in Romell Quioto who missed the last game due to Covid subbing him in for Ibrahim Sunusi.

Montreal had a great chance in the 69-minute when they earned a free-kick but Mihailovic shot was punched away by Coronel. Matko Miljevic was subbed on in the 69-minute and minutes later Rudy Camacho tied the game with a stunning header that went off the post and in.

10 to go and we have the lead thanks to @QuiotoSamir

Quioto gave Montreal the 2-1 lead in the 80-minute as off a horrible error from Coronel he lost the ball to the Honduran who took the ball and shot it into an empty cage. Nancy made his third change in the 84-minute bringing on Zorhan Bassong for Lassi Lappalainan.

New York kept coming at Montreal looking to tie the game but Breza once again was doing a good job making some game-saving saves in the dying minutes. The final white blew and Montreal had won their second game of the season and a second straight win for the club.

Sunusi made his first appearance of the season after confirming earlier in the week that he was out due to a bout with Malaria but was happy to be back with the team.

Head coach Nancy was pleased with the fact that his team was able to turn the game around and get the win.

“We have been working on this kind of spirit and with a lot of humility I am not surprised and I felt during the week the players were ready for that and they spoke about it during half time saying they had been in that situation before and stay focused on the process and this is what they did so good for them and they felt strong so it’s good for everyone.”

Joel Waterman was also pleased with the result and thinks the last 30 minutes of the game is where the team started to hit their stride and play their brand of football.

“The first 20-25 minutes we didn’t like at all and we knew they would come and press and play their game but once we settled down and knew where the space was we settled into the game nicely and this team is resilient and for us to go down and comeback is massive for our team and we want to keep this going.”

This is the fifth time in the history of the club that the team has won two straight games on the road (also won against FC Cincinnati) and they will return home to play their first game at Saputo Stadium on Saturday as they will host the Vancouver Whitecaps at 3:00 p.m. ET.