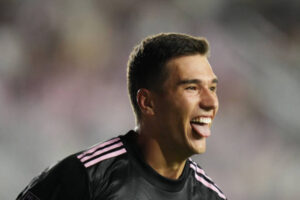 FT. LAUDERDALE – Inter Miami has looked to have found its form at DRV PNK Stadium over recent weeks, extending its current home unbeaten run to five matches in league play on Saturday night with a 3-1 victory over Toronto FC. Among the in-form players for the Eastern Conference club is forward Robbie Robinson, who has erased some early season miscues by contributing goals during this home unbeaten streak.

Robinson netted his fourth league goal of the 2021 campaign on Saturday, giving him three goals scored in his last seven matches overall. The former No. 1 overall selection in the 2020 MLS SuperDraft is a key part of Phil Neville side’s recent run of form and a testament to his hard work on the training field each and every week.

“I work everyday on my shooting — all types of shooting,” Robinson said post match. “I try to work everyday, get in extra [training]. I have been practicing that with the left because defenders have [noticed me] cutting in on my right a lot and defenders are starting to see that and just force me the other way. So just fake the shot with my right, he went for it, hit it with my left and it was a goal.

“The connection we are building with the whole team,” Robinson said. “I think the chemistry you can see each game, attacking wise is getting better and better, we’re making runs off the ball, playing better passes to each other. We know what we want as players and that’s the most important — building that chemistry.”

The pass, the dribble, the finish.

Robinson struggled in his rookie MLS season, failing to score in any of his 12 appearances in 2020. Even with Inter Miami struggling through the months of May and June, Robinson continued to garner opportunities with the first team and now has started in five of the last seven matches, with goals scored against the Philadelphia Union, Chicago Fire, and Toronto FC.

Robinson’s tireless work rate and creative ability with the ball at his feet has seen him play just under Gonzalo Higuain in Phil Neville’s 3-4-2-1 formation, giving him more room to make plays and make runs off Higuain in the attacking third. Both Higuain and Rodolfo Pizarro might bring more attacking flare to the Miami squad, but Robinson is starting to pull his weight with the club looking to get back into the playoff picture.

“I think in terms of his fitness, technicalities, confidence, I think that we’re only seeing a minute percentage of what that boy can do in terms of what he gives the team,” Neville said about Robinson. “The ability to go from defense to attack is breath-taking and you know you see the players behind him, Kieran [Gibbs] and Brek [Shea] when he comes on, it’s a great outlet for us and we’re working really hard with the boy.

“He’s learning every single day, how to become a really good player and we’ve just got to keep letting him grow and letting him have opportunities and keep managing him the best that we can do and he can go as far as he wants to go,” said Neville.

Inter Miami still remain five points back of seventh place DC United for the final playoff spot, but has 15 more matches left on its schedule to make up ground. Up next is a two-match road trip against Orlando City (August 27) and FC Cincinnati (Sept. 4), both matches that Inter Miami will hope to get something out of. Six of its final 15 matches will come at home, meaning the club needs to improve on its 2-2-4 road record to creep into the top-seven.

Robinson’s good run of form is an added bonus to the Miami attack and he will need to continue delivering goals if the club wants to take any pressure off of Higuain and Pizarro going forward.

“I think it’s just a product of putting the pieces together and us finishing our chances really,” Robinson said. “I think it’s been really fun to play with these guys, and I hope to play and score a lot more goals for this club.”