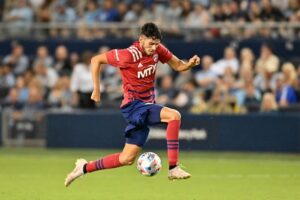 AUSTIN, TX – Austin’s evening came crashing down in a less-than-magnificent seven minutes in the first half. Ricardo Pepi and Dallas destroyed a typically tight Verde defense in a devastating display of finishing, running out eventual 5-3 winners.

Ricardo Pepi, FC Dallas do the Double over Austin in 8-goal Derby Thriller

It had all looked so promising for Austin until the 35th minute. Yes, FC Dallas drew first blood just 5 minutes into the match when the impressive Pepi intercepted a wayward Brad Stuver touch, providing a routine finish for Jesús Ferreira from a few yards out. Ironically enough, FC Dallas’s keeper Phelipe Megiolaro almost fell foul of the same thing a couple of minutes earlier.

But after that early shock to the system, ATX settled into their groove, arguably looking the better of the two teams for the next half hour. That said, for all of their good possession play, Dallas did limit the hosts to mostly crosses and long shots. One of those deliveries paid dividends though when, on 13 minutes, Julio Cascante drew Austin level heading a perfectly bent Zan Kolmanic cross past Megiolaro,  his first goal in Verde.

It was both confusing and concerning, then, when Austin, who before tonight had the 4th best defensive record in the West, saw that record collapse under the fury of a 7-minute Dallas offensive blitz. The man-of-the-moment, Ricardo Pepi, was at the heart of it. Left-back Zan Kolmanic allowed Szabolcs Schön to carry the ball 20 yards unchallenged before slotting a ball to the edge of the box where Pepi settled it and then drilled it through a wall of 3 Verde defenders and past the largely unsighted Stuver.

Three minutes later, and Ferreira was back on the board. Schön was the provider again, this time unintentionally. His blocked shot fell into the path of Ferreira who laced into the roof of the net. Two minutes later and it got even worse for Austin. Schön collected a loose ball at half, slipped in Ricardo Pepi and, with left-back Kolmanic nowhere to be seen, the newest USMNT striker galloped into the box and slipped the ball past Stuver at his near post to open up an incredible 4-1 lead at the break.

Coach Josh Wolff made three changes at halftime in an effort to change things, bringing on center back Jhohan Romaña for Cascante, Hector Jimenez for the shell-shocked Kolmanic, and DP Tomas Pochettino for J0n Gallagher. Austin pressed high, trying to pin Dallas in and cause a turn-over. Dallas, smartly, decided to mix it up. Megiolaro thumped a ball from one end of the field to the next, Romaña tried to head to Besler but got it all wrong, and Jáder Obrien laced a shot past an exasperated Stuver.

Austin, to their credit, though, did not give up even at 5-1 down. With the home crowd at their back, their tackles found a little extra bite. Sebastian Driussi and Alex Ring made themselves constant outlets and were at the heart of much of what was created offensively. It was Driussi who spotted Fagundez run round the back of the Dallas defense, slipping him in for a neat finish. Then Ring got in on the goal scoring action with what is fast becoming his trademark snap header, this time via a Jimenez cross.

At 5-3 with 10 minutes to go, ATX introduced their new number 9, Moussa Djitte. Despite a few moments of flair, the Senegalese striker wasn’t able to provide a grandstand finish on his debut. Austin showed heart in the second half, but Dallas won out – and deservedly so.

What sparing success Austin FC have had this season has been predicated largely on a solid defense and the super-human efforts of their goalkeeper. Tonight, too often ATX looked disjointed and disorganized at the back. An inability to make a tackle higher up the field was the start of it. A lack of intensity to make the tackle around the edge of their box was the end of it. Combine that with what Josh Wolff categorized in the post-match press conference as “Some really poor reactions to the break downs”, suggesting, “That’ll be addressed. We can’t have players on the field react that way”, and you have to wonder how hard this particular Copa Tejas defeat hurt? And what it’ll take Austin to recover from it?

The post Ricardo Pepi, FC Dallas do the Double over Austin in 8-goal Derby Thriller appeared first on Last Word On Soccer.