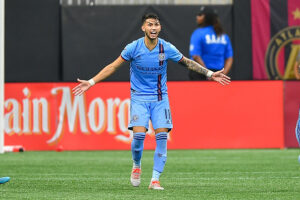 Yankee Stadium played host to a clash between two of the form teams in MLS. The New England Revolution is the team to beat at the top of the three whilst New York City FC is a joy to watch, especially going forward. Matt Turner started in goal whereas Gustavo Bou was on the bench, pair having represented the Revs at the All-Star game.

Tajon Buchanan was absent from the squad altogether amidst his confirmed move to Belgium side Club Brugge but he remains committed to the cause under Bruce Arena. Maciel in for Scott Caldwell was the only other change from the emphatic 4-1 win over FC Cincinnati last time out, Teal Bunbury being the man to replace Bou alongside Adam Buksa.

It may be a baseball field but NYCFC is still pretty imperious at Yankee Stadium. Only twice have they lost this season at home, one of those coming against Columbus and the other at the hands of this weekend’s opponent. Ronny Deila’s side was set to play the Red Bulls in their last game as part of Heineken Rivalry Week but inclement weather saw that game called off. Their last played game was a loss to the Union with Ale Bedoya scoring the only goal of that one. Three changes were made to the XI that lost that one; Amundsen, Acevedo and Ismael Tajouri-Shradi making way for Keaton Parks, the magical Maxi Moralez and Thorarinsson.

James Sands dropped into centre-back for this one with Amundsen on the bench and the NYCFC man along with Matt Turner is in Gregg Berhalter’s World Cup qualifying squad. The pair both played a big part in the Gold Cup-winning side and so they have a great chance to succeed in the USMNT jersey.

squad that will open the 2022 @FIFAWorldCup Qualifying campaign.

It was a lively start with both sides enjoying spells on the ball. Even though the Revs’ frontline was far from full-strength, goals looked a matter of when rather than if. The opener came courtesy of Maxi Moralez and his unbelievable intelligence, another incredible assist to add to his catalogue. He dinked the ball through for Taty Castellanos who headed over Turner on the turn. The Argentine’s celebrations were met with the offside flag but the VAR officials weren’t convinced. Referee Kevin Stott took a brief glance at the pitchside monitor before awarding Taty the goal, 1-0 to NYCFC after a half hour at Yankee Stadium!

This goal moved Taty onto nine for the season, in good company with Nani, Ricardo Pepi and CJ Sapong. James Sands picked up a yellow for petulance towards former NYCFC man Tommy McNamara, Maxime Chanot and Andrew Farrell following the American into the books in quick succession before the break.

La Pantera, a.k.a. Gustavo Bou entered the fray at the half in the place of Emmanuel Boateng as the Revs went in search of a leveller at Yankee Stadium. It was the hosts who struck next though. Santiago Rodriguez forced Turner into a good save before Moralez and Taty linked up once again. The diminutive creator crossed to the back post where Castellanos was in acres of space, strolling onto the ball and firing past Turner. This took his tally into double figures, ten goal contributions (seven goals and three assists) in his last eight outings.

Game Recap and Next Games for Both Teams

NYCFC is clearly a very good team who is a genuine threat in this league. The Revs went in with a weakened side and obviously can’t expect to win every game. Arena’s men still possess a handsome lead at the summit of the Eastern Conference and this defeat at Yankee Stadium doesn’t negate that. Tajon, Gil and Bou will soon return to the side!