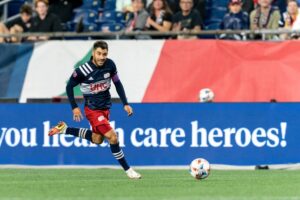 FOXBOROUGH, Mass. – New England Revolution hosted Colorado Rapids on Wednesday night. The Revs had clinched the Supporters’ Shield over the weekend and were one win away from setting a new MLS points record. Colorado had just clinched a playoff spot and were looking for a result to secure a home playoff match in the first round.

The first half was a game of counter attacks and half chances. Adam Buksa and Gustavo Bou received plenty of service from the Revs midfield. Colorado’s defense bent several times but did not break. Austin Trusty made several timely blocks and interceptions.

The best chance for the home side came 12 minutes in. Tajon Buchanan cut inside on Steven Beitashour and had two shooting opportunities. The first was blocked by Steven Beitashour. Buchanan shot the second one wide of the near post.

Cole Bassett had a great chance in the 34th minute. He shot the ball from inside the box, curling it inside the far post. Goalkeeper Matt Turner made a great diving save. The half ended 0-0.

Bruce Arena’s side raised their level in the second half. They were sharper and stronger on the ball. Colorado absorbed more pressure with numbers back.

Andre Shinyashiki and Cole Bassett both had big misses. Three minutes into the half, Shinyashiki had a great angle at the near post but got nothing on his first time shot.

Kessler himself was robbed on a corner in the 72nd minute. The ball was knocked down inside the six yard box. Kessler shot with his left foot, but Yarbrough made the point blank save from the ground.

In the 74th minute, Michael Barrios dribbled from midfield into the box. He shook off Henry Kessler and squared the ball to Bassett who shot right at Turner.  The Revs finally broke the defense moments later. Buksa got to the endline and crossed the ball to the top of the box. Buchanan collected and dribbled wide to set up a shooting angle. He threaded his shot through two defenders and Yarbrough to find the far bottom corner.

Colorado’s lack of finishing: The Rapids were the lesser team in this match. Robin Fraser did not play his best starting lineup. The competed admirably for 60 minutes. They had two great chances in the second half and didn’t finish. That 74th minute with Bassett’s miss and Buchanan’s goal illustrated the difference in the two sides.

Buchanan and Gil set records: Buchanan’s goal gave New England the win to set the points record. Gil did not have a goal or an assist but did set the single season record for chances created before being subbed off in the 88th minute.

The MLS points record: With this win, the Revs have 73 points with one game to play. That is now the most points in a single MLS season, beating the record set by LAFC in 2019 with 72.