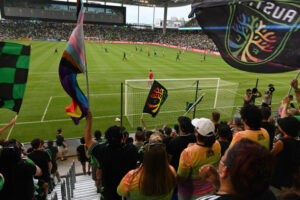 It’s Monday night, a full 24-hours since the end of the Austin FC v Columbus Crew match, and my ears are still ringing. Genuinely. How did this come about?

I picked this game for a switch, foregoing my seat in the press box for a spot on the stands. I selected this particular match because of its heightened significance. Much has been made in the week leading up to the first meeting of Austin FC and Columbus Crew of the supposed rivalry that exists between the two clubs. There is undoubtedly and understandably animosity between the two franchises for historical reasons that I don’t need to delve into here. If any fan of either team is unfamiliar with the story at this point, Google is your friend.

So, does a rivalry exist or not?

In a press conference earlier in the game week, Austin FC Head Coach Josh Wolff largely dismissed any special significance to the match. When asked about Columbus, Wolff pointed out that he had spent the longest unbroken stretch of his career there, 5 years, as assistant coach to Greg Berhalter, and had nothing but good things to say about the city and the Ohio club. When pressed on whether conversations happen among ATX leadership regarding the feud, he essentially said no one pays it any mind.

In regard to the match itself, Wolff said that “on-field rivalries aren’t manufactured”. Instead, “they develop organically”. He pointed out that Austin already has two fierce in-state rivals in Dallas and Houston. Austin hasn’t played either team in an MLS match yet, so a little at odds with his ‘rivalries aren’t manufactured’ statement, but I get it. When LAFC showed up, they were immediately LA Galaxy’s #1 rival. The same is true of NYCFC and New York Red Bulls.

Columbus Head Coach, Caleb Porter took a slightly different tact during his midweek press conference. “We try not to get caught up in the external storylines because every game is really the same in a lot of ways. But we’re fully aware of the games that mean a bit more — whether it’s a rivalry game — to our supporters. We’re not idiots. We know this is a game that our fans want to win. We know the supporters have it circled, and I had it circled twice because of that.”

So, as I climb the stairs at Q2 Stadium to Supporters Section 103 on Sunday evening, I was curious as to what I might see, hear and experience during the game?

The moment the Crew players took to the field to warm up, the booing began. There were a few cries of ‘Screw the Crew!’ But much like the t-shirts bearing that chant, it didn’t feel like anything more than good-natured ribbing. Legitimate animosity and anger appeared to be in short supply. More in evidence? Anxiety.

Austin FC had failed to score in their home opener the previous weekend, leaving the door open to the possibility – the nauseating possibility for Verde fans – that Columbus Crew might be the first-ever team to score at Q2. From fans nearby, I heard, “I want us to win, but if we don’t win, we need to at least stop them from scoring!”, and “I could live with a 5-1 defeat, just as long as we score the 1 first!”

Austin FC fans did themselves proud with their pregame Pride Week celebration, raising large, colored pieces of card to spell our ‘ATX’ in rainbow. It felt pretty amazing to be a part of that, stood there holding up my red card, considering the significance of the message we were helping to send out to the world. And then, the whistle blew, and the stands exploded into life!

Drums, horns, and other indistinguishable (to me) instruments combined with several thousand singing voices, sending waves of cacophonic support flooding across the field! The Austin players could not fail to be spurred on by it. Diego Fagundez almost channeled it into a goal when he lashed his half-volley narrowly wide of the post less than 30 seconds into the match. His status as an Austin icon would have risen to McConaughey/Nelson levels had that shot found the back of the net.

Austin continued brightly, causing many of those fans stood around us to cast glances and nod approvingly to one another. Was it possible that this first-year franchise team, without a win in seven games, injury-hit and fielding at least two heavily patched-up players, might get something out of the current MLS Cup Champions? As the first half wore on, Austin were forced back, Columbus’s superiority starting to show itself. The music continued. And by now, I was signing, too.

The now traditional ‘green light bath’ enveloped the stadium during the break, and then before we knew it the second half was underway. Cue music and craziness once more! The second half was akin to well-matched boxing bout. But as the game ebbed and flowed, so did the musical accompaniment. When the home team need a boost, the supporters provided it with just the right rhythm to stir things up.

Columbus surged forward. Alex Ring crunched in with a tackle, regaining possession. The Crew regrouped and pressed again. This time, Brad ‘Spider-Man’ Stuver, with his inhuman reflexes, saved the day. Columbus pushed once more, only for Diego Fagundez, the definition of perpetual motion, to dispossess the opponents and spring galloping Jon Gallagher in behind the Ohioan defense. And so it went, back and forth, punctuated by cheers, cries, gasps, and shouts from the crowd, the only thing that momentarily silenced their singing. Our singing.

At the final whistle, despite the 0-0 result, the supporter section remained steadfast. Accordingly, I was able to witness – and participate in – another swiftly established Verde tradition, as to a person the south stand sang Daniel Johnston’s beautiful and heart-breaking, ‘True Love Will Find You in the End’. I struggled to join in. I made my way down the stand and just stood there, arms raised, tears in my eyes. The players linked their arms and watched us, some singing along. This was Austin, captured in a moment.

After the match, I made my way to Circle Brewing hearing that there might be some Crew fans on hand. Sure enough, I got to visit with a couple. Michael Brim, a Crew fan since 2004, ironically sporting a baseball cap with the ill-fated and short-lived Columbus SC logo, had an axe to grind. “We wanted to be at the first Columbus v Austin game and came down expecting animosity. I guess we feel more animosity than you guys do because Austin is the nicest city in the world! All we got was ‘Welcome to Austin, good luck today’. It turned our stomach to be honest”, he laughs good-naturedly.

Fellow Crew fan Michael Maret did have a genuine complaint. He wasn’t happy with the ticket allocation ‘of about 30 seats’, or the location of the away fan’s seats in a ‘small corner’. He said that he hoped Columbus would treat any traveling Austin fans with ‘less disrespect’, ‘equally’.

Both Brim and Maret, when talking about the hostility that exists between the two teams said they understood that their beef was really with Anthony Precourt. Brim did feel like that when the idea of the Crew moving to Austin was mooted, though, some of the supporter’s groups were ‘really pushing for it as well’. “Listen, I understand it. You wanted a team, absolutely. At the same time, don’t touch my team!”

Austin Anthem Supporters Group Interim-Board Member Robert Avery was in on the conversation, too. Avery was happy with the result, but not really. “I’ll take the 0-0 because at least no one’s scored against us at the Treehouse yet”. Enjoying a beer with Austin’s guests, he had a clear opinion on the supposed rivalry. “It’s not a rivalry yet. If we play more, it has to become a rivalry on the pitch, not from the Twitter-heads!”

Avery concluded, “Everyone we met today (Crew fans) was really nice. We had a good time with them before the match at Oskar Blues and here at Circle”. With a wry smile, Avery conceded, “I know we probably won’t get that same reception if we go to Columbus, but it is what it is”.

So, does a real rivalry exist between Austin FC and Columbus Crew? It’s complex and messy. Many fans in Ohio clearly still feel the pain – and resultant bitterness – of almost losing their beloved team. But in an odd kind of a way, that experience has bound these two clubs together in unique fashion. Rather than rivalry, it almost sort of resembles something more akin to family.

But how can it recognize you,
If you don’t step out into the light,
Don’t be sad I know you will,
Don’t give up until,
True love will find you in the end.

The post Revelry over Rivalry – A View from the Stands appeared first on Last Word On Soccer.