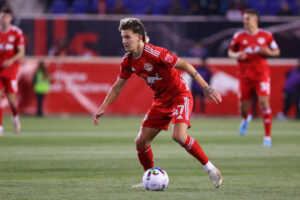 Preview – Fresh off their first loss of the season, the New York Red Bulls will look to bounce back against the unbeaten Columbus Crew. It’s a good test for both teams who are evenly matched on paper. Both teams are top-three in the early East standings, looking to continue their strong starts to the year.

The two original MLS franchises will face off for the 76th time on Sunday afternoon. Let’s take a closer look at this fun Eastern conference matchup.

Red Bulls: eager to overcome the loss to Minnesota United

Last weekend’s 1-0 defeat to the Loons was the sort of loss that leaves everyone frustrated. New York dominated the action throughout the match, posting an xG that was three times as much as Minnesota. If there’s a positive in that performance, it was the ability to create chances that on another day would’ve led to a blowout victory.

Overall, the offensive output for Gerhard Struber’s men has been a pleasant surprise. Per Fotmob, Red Bulls rank first in shots on target (8) and big chances are created (14) while they’re third in possession won in the final third (23). The last stat represents the success the trademark press has produced. And the attack has been given a boost, as Struber said that loan signing Ashley Fletcher is “available for selection” for Sunday. Whether he starts or comes off the bench is yet to be determined. Luquinhas came off the bench against Minnesota and impressed in his brief debut, he may get the nod in the starting XI.

Ashley Fletcher will be available for selection for the match on Sunday, according to Head Coach Gerhard Struberpic.twitter.com/j46pfuM7bk

Cristian Cásseres Jr. has missed the last two games but could be in the 18 for this one. It’s a bigger game for New York early on, this is the second of a two-game homestand. A second consecutive defeat would erase much of the good vibes from the bright start to the season, but a win would help boost the Red Bulls as a top-4 conference outfit.

Tied atop the Eastern table with the Philadelphia Union, Columbus is enjoying themselves at the moment. Wins against Vancouver and Toronto FC have Caleb Porter’s team looking like a contender again. The draw at San Jose sandwiched in between was disappointing but there is a good balance throughout this team. Miguel Berry has unseated longtime danger-man Gyasi Zardes, to the point the latter could be involved in trade talks.

Lucas Zelarayan is arguably the best playmaker in the league and already has four goals and an assist to his name thus far. His wing partner and former Red Bull Derrick Etienne Jr. has two goals and an assist. On the whole, Columbus will be a team not to be messed with in 2022.

This matchup has always proven to be tight affairs decided by one goal. Furthermore, the game takes on more importance as this is the last game the teams will play before the international break. A win for either side will be a big boost for their psyche. A draw is likely the most expected outcome, it should be a good one at Red Bull Arena.