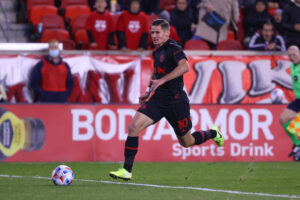 PREVIEW – It’s finally here, the 2022 Major League Soccer season. Two teams looking to punch above their weight face off as the New York Red Bulls visit the San Jose Earthquakes. It’s the 43rd all-time meeting between the squads, and the first head to head meeting since the 2019 season opener. That ended in a 4-1 rout for the Red Bulls in Harrison, and they’ve also won the last meeting in San Jose 3-1 back in 2018. New York has won the last three meetings while San Jose hasn’t won on opening weekend since 2018.

But that’s old news, what we see before us now are two young teams looking to win three points. So let’s check out this game preview.

As is the norm now, the Red Bulls endured yet another busy offseason. Former captain Sean Davis departed for Nashville SC, while other players such as Kyle Duncan, Fabio and more left for moves abroad. On the flip side, New York was able to bring back Tom Edwards and Caden Clark on loan and splashed the cash to bring in playmaker Luquinhas as a DP. Patryk Klimala will shoulder the load for goals in his second season. Carlos Coronel in net will look to keep his status as one of the league’s best keepers. A core has been formed around young talents at all areas of the field and will be boosted by the return of new captain Aaron Long, back from an Achilles injury.

Replacing Davis will be tough, but the skill sets of midfielders like Dru Yearwood will serve well. He’ll likely partner Cristian Cásseres Jr, with homegrown Daniel Edelman on the bench. More importantly, Gerhard Struber is in his second full season which sparks continuity in the team with his tactics. It’ll be interesting to see the starting XI of the team with new signing Lewis Morgan on board. It could be a 4-2-3-1, perhaps a return to the 3-4-2-1 formation that brought great success during their playoff run last season. Whatever it is, the usual high-press and tackling up the field will be on full display.

San Jose: a roster of proven talents against a loaded Western conference

Having arrived in 2018, it’s been a slow yet disappointing run for the Earthquakes under Matias Almeyda. The club made the playoffs in a shortened 2020 season, but haven’t made the postseason during a full 34-game season since 2017. Gone is one of the all-time great players in MLS and all-time leading goal scorer in Chris Wondolowski. Oswaldo Alanis also left the club and is back in Mexico with Chivas.

On the bright side, acquisitions were made that will improve this roster considerably. San Jose traded for Jamiro Monteiro of the Philadelphia Union and will add to the attack. Slovakian midfielder Jan Gregus came over in the Re-Entry Draft after a couple of seasons in Minnesota. And Francisco Calvo brings depth to the backline, he comes from the Chicago Fire.

Our newest signing is ready for Saturday’s Home Opener.#VamosSJ pic.twitter.com/JpkhHszSFA

Add to that the young dynamic talent of Cade Cowell, and this roster looks more formidable on paper. Will it cause some waves in the West? We’ll soon find out, but hosting the Red Bulls will prove a stiff early test. Fitness issues will arise in both teams given how preseason has gone. Red Bulls will likely be without both Tom Edwards and Luquinhas due to visa issues. San Jose will rely on the likes of Monteiro, Cowell and Cristian Espinoza for a fruitful attack.