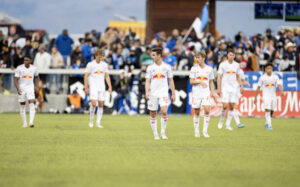 Preview — Coming off an impressive win at San Jose, the New York Red Bulls travel to play Toronto FC Saturday afternoon. The hosts will finally play at home for the first time in front of a big crowd in a long time. The team are still looking for their first win in what’ll be Bob Bradley’s second game in charge.

It’ll be the 39th all-time meeting between the clubs, let’s take a look at some key factors in this game.

Red Bulls: looking to make it two wins in two

It was simply the perfect start to the campaign for Gerhard Struber and his players. The 3-1 win over the Earthquakes showed the some of the best qualities of the team, it’s pressing and it’s tackling in midfield. Frankie Amaya shined and helped set up Omir Fernandez for his tally through the keepers’ legs. Patryk Klimala got off the mark with a goal, while new signing Lewis Morgan got his first assist.

The club has been busy this offseason, and brought in Ashley Fletcher on loan from Watford. Unfortunately, he and DP signing Luquinhas won’t make the trip as they deal with visa issues. Good news is Tom Edwards is back in the States, and may see some action this weekend.

On the injury front, Wikelman Carmona is still out with a foot problem. Also, Cristian Cásseres Jr — who started against San Jose — will miss this weekend’s game with a hip flexor. That could signal a first MLS start for youngster Daniel Edelman, who came off the bench to make his MLS debut last weekend. The rest of the team will likely be unchanged. A bright start will be needed once again to quiet what’ll be an excited BMO Field crowd.

Toronto FC: looking for their first win of the season

It looked dicey at times, but for Bob Bradley and players the 1-1 draw at FC Dallas is a positive result. The home side opened the scoring inside the opening nine minutes before Jonathan Osorio leveled it before halftime. A point away from home is a nice way to start off the season, especially for Bradley as he oversees a young team. Now they get to come back home to a crowd desperate to cheer on their club in what’s been a long time coming.

“They all love Toronto and they know what it’s like to play games in front of our fans and how important that is, so fantastic for us to be ready now to get that chance.”#TORvRBNY | #TFCLive

The BMO Field crowd has been electric for the CanMNT during their phenomenal World Cup Qualifying campaign, and will be up for it on Saturday. One thing to note is that this is a young Toronto FC team. While there are veterans like Michael Bradley, Alex Bono and new signing Carlos Salcedo, there’s youth littered on this squad too.

Youngster Jahkeele Marshall-Rutty was really good at right-back, and is only 17 years old. Deandre Kerr is set up as a winger, he’s 19 with starlet Jayden Nelson occupying the other flank. They’ll surely be fed quality passes by danger man Alejandro Pozuelo. The Spaniard can unlock any defense in the league. Osorio needs one more goal to reach 50 club goals for Toronto FC. He would join Jozy Altidore and Sebastian Giovinco as the only other players to achieve the feat. It should be good one on tap Saturday afternoon.