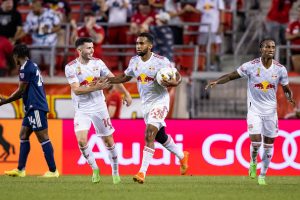 The New England Revolution made light work of NYCFC last week, but it was a different story against the other New York team. As opposed to the usual recap style, here are two talking points from the Red Bulls’ win over the Revs. This 2-1 result is far from ideal for New England’s playoff push.

There is no escaping the fact that the Revs are off the pace this year in comparison to last. Even when Bruce Arena’s men have scored the opener, they have thrown it away far too often. “If we’re a little bit of a smarter team we have a chance to walk off the field with three points and we end up with zero, so that’s disappointing.” These were Arena’s words following the defeat to the Red Bulls and this could easily have been said after a number of their fixtures.

Looking at the numbers and it doesn’t read well, especially with New England’s playoff push on the agenda. As of the end of August, LAFC hadn’t dropped a single point from a losing position. Meanwhile, FC Cincinnati were at the other end with 23 points and the Revs on 26. 26 has now become 29 for the latter, this breaking down as seven draws and five defeats.

Last month, in a rollercoaster clash with Toronto FC, the same thing occurred. Federico Bernardeschi gave the Canadians the lead before goals from Tommy McNamara and Justin Rennicks flipped it all on its head. Another Italian, Domenico Criscito had the final say, and this isn’t even the worst of it from the Revs.

Midfielder Matt Polster wasn’t too enthused by this nasty habit that his side are becoming known for. “I think we’ve dropped the most points in the league so far in a winning position. So it’s really disappointing, especially at this point in the season, where we’re trying to pick up as many points as possible and make the playoffs.”

Not only did the Revolution throw away a lead but they suffered yet another setback away from home. After this visit to Red Bull Arena, just one of the last eight road games has seen Arena and co walk away with all three points. This sole win was a 3-0 win down in Orlando back in early August.

Since then, there was the tie with Toronto and then a mauling at the hands of Wilfried Nancy’s CF Montreal side. Along with this, Philly and NYCFC overcame them, putting a further dent in New England’s playoff push. Gustavo Bou scoring three across these two games was the only real positive.

There is very little time to feel sorry for themselves or even to reflect for the Massachusetts men. A quick turnaround beckons and that is something that Polster highlighted. “I think it’s better that we have a game coming up. You can’t really dwell on this game too much. It’s good in that manner. Obviously, it’ll be a little difficult with the travel and the legs. We’ll just recover as quickly as possible. I think it’s better that we have a quick turnaround. Our focus is already shifted to Houston.”

As was mentioned there, it is the Dynamo who lie in wait next for the Revs, on Tuesday night. BBVA Stadium is the home of the Texas side and whilst they have a mountain to climb in terms of making it above the line, New England’s playoff push is still alive and well.