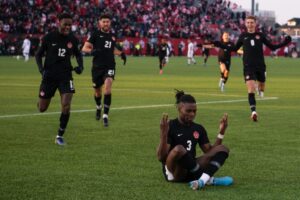 HAMILTON, ON – The CanMNT defeat the United States 2-0 in World Cup qualifying. It was a wonderful night as Canada got four points in two games against the USMNT.

An already wonderful World Cup qualifying campaign got even better for Canada on Sunday afternoon, as they beat the United States 2-0 in Hamilton to stay top of the group.

No Alphonso Davies, no Stephen Eustaquio, no Atiba Hutchinson, and half their players out of season – but it’s no problem for this Canadian team. Once again John Herdman’s side showed us exactly why they are top of the CONCACAF World Cup qualifying table and deserve to be there too, as Canada beat the United States 2-0 in Hamilton.

It wasn’t a beautiful game of football, as the Canadian cold left the pitch rock hard, but Canada found a way to deal with the consistent pressure put upon them by the United States throughout the match. In truth, the United States had excellent buildup-play throughout the match and were by far the more dominant team on the ball, but nothing quite came together for Gregg Berhalter’s side in the final third. That was essentially where the match was lost for the United States. Just two or three genuine scoring opportunities fell towards the Americans, as Canada’s backline – Adekugbe, Miller, and the wildly consistent Alistair Johnston in particular – were excellent throughout. Milan Borjan also had a strong performance in his return to his hometown of Hamilton, pulling off a stunning point-blank save on Weston McKennie on the stroke of halftime.

Second Half: CanMNT defeat USMNT with a late insurance goal

While the scoreline shows a rather comfortable Canadian victory, it was anything but. They had to fight for it, and that’s why they continue to set the pace in World Cup qualifying. Canada isn’t just the most impressive team in the CONCACAF region – they are currently one of the best globally in terms of performance relative to their respective region. And it’s no coincidence either, as this team continues to show how many fights they have in them. The belief behind Canada’s program at the moment is sky-high, and they are setting an example for so many other nations (dare I say, the USA included).

As mentioned earlier, the path to victory wasn’t particularly pretty for Canada. Osorio and Kaye started in the midfield with neither having played a match in months, and that showed. Even with David and Larin dropping deep to help out, the United States certainly won the midfield battle, but the difference between the two teams on the night was Canada’s quality up front and the USA’s lack of it. Cyle Larin finished a difficult chance in just the 7th minute, and in reality, that was Canada’s only true scoring chance for the first 70 minutes of the match or so. But when you have quality finishers like that up top, you don’t need many chances in order to win a match. That was the biggest difference between the two sides.

Reminiscent of Lucas Cavallini’s goal in October 2019 to seal Canada’s first win against the United States in 34 years, it was Sam Adekugbe who relieved the pressure put on by the Americans late, scoring a brilliant goal in the 96th minute to drive home the 3 points for Canada. It was a special moment for the team, and for Adekugbe in particular, as it was his first goal for Canada.

The CanMNT is first in Concacaf World Cup qualifying

Sitting pretty at the top of the table, Canada will continue their exceptional World Cup qualifying campaign on Wednesday night in El Salvador, looking to make it six consecutive wins in this notoriously difficult region. If certain results go their way, Canada could seal a spot at the FIFA World Cup in Qatar that night itself, although overall, qualifying is now just a matter of when and not if for this incredible team, who are undoubtedly the best story in all of international football at the moment.