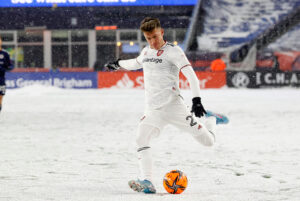 FOXBOROUGH, MA – Real Salt Lake wins narrowly against New England Revolution and got all three points. However, for long periods of the game, despite the adverse weather conditions, the Revolution looked fairly comfortable at Gillette Stadium.

Real Salt Lake failed to offer all that much going forward until the last fifteen minutes or so, and that is when they struck gold. The side from Utah rallied from two goals behind to pierce New England hearts on their own turf and take all three points back home with them.

Has team selection come back to bite Arena?

After alluding to it in the pre-game press conference, Bruce Arena made a whole host of changes. There were seven different starters compared to the first leg win over Pumas to be exact. MVP Carles Gil plus fullback duo Brandon Bye and DeJuan Jones were amongst those making way with the likes of Jon Bell and Tommy McNamara coming into the XI.

These wholesale changes are completely understandable due to the Saturday-Wednesday-Saturday-Wednesday nature of the scheduling for the Revolution. On the other hand, Real Salt Lake is blessed with the absence of the Champions League when it comes to recovery. Not only were there controversial alterations made to the starting line-up but some fans weren’t in agreement with that made mid-match.

Defending his decisions, coach Arena said this: “Two of the players who came out of the game had yellow cards. This referee didn’t do a good job in terms of issuing cards and on a day like today where there’s going to be a lot of sloppy plays, you don’t want to be playing the last thirty minutes, at 1-0 which it was at the time, with two players with yellow cards because you never know what the guy is going to do.”

What went wrong for the Revs vs Real Salt Lake?

The Revs are of course to blame themselves. That being said, it would be fair to say that the officiating certainly didn’t do them any favours, a sentiment echoed by Arena. On top of that, Real Salt Lake did very well to take their opportunities and continue their unbeaten start to the season under Pablo Mastroeni.

As previously mentioned, the Revolution head coach was his usual outspoken self when it came to the referees and the use of VAR. “We have the most inefficient use of VAR, probably in the world. We looked at it and the ball was moving, having said that they still got the goal but there’s no point in having VAR if they can’t look at that tape and make that decision.” Here Arena is referencing the equalizer which came from a free-kick where the ball was moving.

The final and pretty obvious stumbling block was the weather. Both New England and RSL had to deal with it so in that sense it was a level playing field, but it still loomed heavily over proceedings. Talisman Gil certainly expressed his outrage in a post-match interview and his feelings were shared by his teammates and coach alike.

Would they be so brazen in their comments if the result ended up differently though?

“Obviously the conditions were a factor, the wind was heavy” was what Ryan Spaulding had to say whilst the more experienced AJ DeLaGarza reiterated the sentiments of Gil. “The worst conditions I’ve ever played in, in my entire life. The wind, the snow, the ice- at the end of the day those are all excuses… everybody watching knows that’s not how you play the game.”

Jozy Altidore scores his first goal in a Revolution jersey

In spite of the result, it wasn’t all doom and gloom for those of a Revolution persuasion. One positive occurrence was the first New England goal for Jozy Altidore. The legendary USMNT forward has made a few cameo appearances since swapping Toronto for Boston and he came up with the goods against Real Salt Lake. Just a moment after coming on as a sub, he found himself in the right place at the right time to convert Sebastian Lletget’s cross which had been headed on by Buksa.

Another moment of celebration was the debut of Ryan Spaulding. The fullback became just the fifth Revolution II alum to appear for the first team and he certainly showed that he is capable of performing at this level. “It was an incredible feeling. The first people I told were my family and they were super happy for me. It was a special moment” was how Spaulding described his first taste of the action.

Meanwhile, fellow fullback DeLaGarza spoke highly of him too: “I thought he did really well for his first time, [especially] in these conditions. I told him yesterday to take advantage of every opportunity you get because you don’t know how many you’ll have and so I think he did tremendous.”

It is a truly gut-wrenching result for the Revs as Real Salt Lake wins narrowly. This was because of Real Salt Lake’s late goal scored by Tate Schmitt. right at the end of the game. The conditions were unplayable but as was said previously, both teams play in the same weather and so that is not an excuse. Alas, Real Salt Lake is the team to continue their unbeaten start to the season whilst Arena’s men must now quickly turn their attentions to a huge trip to Mexico City.

The post Real Salt Lake wins narrowly against the Revs in the snow appeared first on Last Word On Soccer.