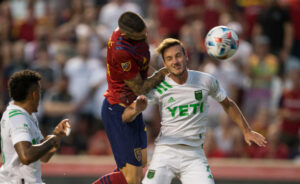 Given Austin FC’s predictable pattern in games so far this season, Real Salt Lake may not have needed the referee’s help to ensure their victory at Rio Tinto. When the Verde were reduced to 10-men just a few minutes into the second half with RSL already a goal to the good, there was a sense of the inevitable – and so it proved, the hosts running out 1-0 winners.

Austin started the match with arguably their strongest eleven. The ATX defense remained unchanged. The attack provided reasons to be hopeful. New DP Sebastian Driussi played the 9-spot, with Tomas Pochettino tucked in behind, flanked by Cecilio Dominguez and Diego Fagundez. With Alex Ring and Dani Pereira in the holding mid positions, grit and guile appeared to be in abundance.

Austin, per their typical script, started with verve. Their passing was crisp and zippy. Excellent headed opportunities were created for Dominguez and Pochettino. Both spurned their early looks at goal. The ever-impressive Fagundez rattled the post with a blistering shot from just outside the box. Austin were bossing possession and creating early opportunities to take the lead, but failing to. Sound familiar?

Guess what? RSL began to patiently work their way into the game. Austin were pressed back. Deja vu took hold. And on 32 minutes, former USMNT striker Bobby Wood showed how to finish a header, clinically converting a Jonathan Menéndez right-wing cross. The goal had been coming. Menéndez had already tested Stuver at the near post. Damir Kreilich had a couple of excellent sights of goal with two headers, either one of which he could quite easily scored from.

Then early in the second half, Austin’s fate was essentially sealed. Julio Cascante, already saddled with a yellow card, pulled down the pacy Albert Rusnák as he sought to get in behind the Verde defense. The ref initially awarded RSL a free-kick just outside the box. Then, several moments later, he decided to jog over to the VAR monitor. Austin hearts were in mouths. Was he going to upgrade the free-kick to a penalty kick?

No, instead, having adjudged Cascante to be the last defender, he flashed another yellow card followed by a red card. It was an extremely harsh decision, not least of all because Austin had two other players in the box able to intervene. The decision was made all the more galling when on review the attacking play had clearly been offside. Nevertheless, Cascante’s night was brought to an early close and with it, in truth, Austin’s too.

ATX didn’t look bad as such. Indeed, for stretches of the second half it was difficult to identify the team playing short-handed. But it’s cold, hard fact of Austin’s season that when they go behind, regardless of having enjoyed the majority of the possession in almost every match this season, they struggle to come back. Their task wasn’t made any easier when an ugly tackle ended the impressive Sebastian Driussi’s night early.

Even a player down, Austin tried manfully to counter-attack to snatch a goal and with it a vital road point. Verde keeper Brad Stuver manned the store with another ‘All-Star’ performance. While at the other end of the field, Austin showed heart and desire, but very little real creativity.

Austin faced a canny opponent and an unforgiving referee. Still, despite their pretty soccer and abundance of heart, when it comes to turning potential into points, considering this was their 11th scoreless game of the season, Austin continues to be their own worst enemy.

Driussi showed flashes: He may not be the answer at number 9, but Sebastian Driussi clearly has attacking chops. He showed great movement, classy touches, and was dangerous in his delivery from dead-balls. He will contribute to Austin’s offensive uptick.

Bad at Breaking lines: Wolf continues to highlight the inability to routinely break lines, get in behind opposition defenses, be disruptive. All true. But Austin are running out of games to start doing it.

At what point do principles take a back seat to doing whatever it takes to secure points? Though it’s laudable how Wolff and his coaching team are committed to developing Austin’s style, a way of playing, that approach isn’t delivering W’s. Fans are starting to get restless and vocal. So, do they sacrifice their approach for something different, something more direct perhaps, in an effort to just get games over the line? If they’re to achieve their stated goal of making the play-offs this season, they might have to.