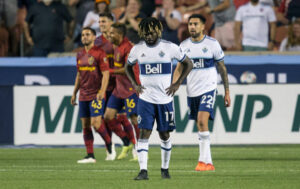 SANDY, UTAH – Being based in Utah, and the home stadium of another MLS side, it is always an interesting fixture when team’s that fit that description clash. So as the Vancouver Whitecaps “hosted” Real Salt Lake on Wednesday night, the “away” fans seemingly held their end of the bargain. As Toronto FC is set to return home soon, Vancouver can only wait until they do the same as they welcomed their landlords to the Rio Tinto Stadium.

Freddy Juarez lined his starting eleven up in his typical 4-2-3-1, featuring three changes from Saturday’s 1-0 loss to LAFC. Real were sitting on the outside of the playoff bubble looking in, having limped out of the gates by their standards. Damir Kreilach and Erik Holt played spoiler the last time these two met, however it would be only the Croatian starting on Wednesday.

Marc Dos Santos had to alter his lineup as well, following Lucas Cavallini and Max Crepeau’s departure for Canada’s Gold Cup roster. Brian White slotted in up front, and 2020 fan favourite Thomas Hasal made his return to the starting 11. Hasal’s last appearance came in this fixture last September before picking up a head injury which ruled him out for the rest of the campaign.

Early bird gets the goal:

Vancouver has become synonymous with slow starts in 2021, registering just one first half goal in their opening 11 games. It took Kreilach just 46 seconds to equal that tally in this one. Before half of RSL’s “away” crowd had found their seats, Kreilach had beaten Erik Godoy to a through ball and saw the young Canadian keeper off his line. A swift swing of the boot lifted the ball up and over Hasal, and Vancouver found themselves playing from behind once again.

A relatively slow first half saw Dos Santos’ men with more of the ball and on more attacking areas than typically seen, however no significant chances were created. The sides went into the dressing rooms with Kreilach’s goal the difference.

Juarez must have said something special to those in Claret, as they sprung out of the blocks. Having forced Hasal to stop a couple more shots, Vancouver naturally fell back into a defensive state. Justin Meram found himself with time and space on the left flank, and crossed the ball into a loaded Whitecaps penalty area. Kreilach found himself rising above Javain Brown and nodded home his second of the game in the 57th minute.

A couple of chances for either side followed in the next ten minutes or so, with Brian White squandering a chance in Real’s box, and Kreilach striking the woodwork as well. However the open play lead to a certain set piece from 12 yards out for Albert Rusnak. Meram was brought down by Brown, and the Slovakian slotted home a well taken spot kick in the 74th.

Then finally, in stoppage time (as Vancouver fans braced themselves), Aaron Herrera slid through the Vancouver Whitecaps midfield like a hot knife through butter, and after a couple of bounces, found Anderson Julio in the box. His strike found the top left corner, as Real’s fourth all but killed this one in the 94th.

That would be it for the scoring, as Real Salt Lake picked up their first win in four games, when they played Vancouver on June 18th. The win sees the Utah side move up to 6th in the conference. With a tough schedule ahead of them, three points goes a long way for Real.

As for Vancouver, their winless streak extends to eight, as the “Utah tenants” stay rooted to the bottom of the western conference, and just one point ahead of the basement of the league as a whole. The Canadians welcome the high-flying LA Galaxy to Utah next Saturday, with another difficult test laying ahead of them.