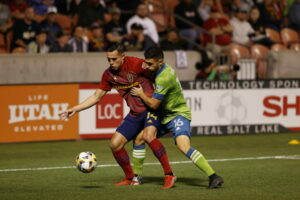 Damir Kreilach has been with Real Salt Lake throughout its tumultuous times. According to some Real Salt Lake fans on social media, Kreilach is someone that inspires hope for the club.

Kreilach inspired hope when he scored the game-winning goal against the Seattle Sounders on Saturday night. The two-time MLS Cup champions journeyed down to Utah after a midweek match against Santos Laguna to punch their ticket to the Leagues Cup final. RSL also had a midweek tilt where they edged out San Jose in a chaotic 4-3 victory.

Real Salt Lake picked up another three points when Kreilach hit his header past Stefan Frei, who made his return to club play during the Leagues Cup match after time out with an injury.

The joy on Kreilach’s face could be seen from outer space.

Thought we should start your day with something amazing pic.twitter.com/0oGYaExUvS

As for the Sounders, the team now sits in second place in an ever-tight race for the top spot in the Western Conference — which is currently held by Sporting Kansas City. The Sounders are rejoicing in receiving goalkeeper Frei back, but the veteran hardly took goal kicks and tried to keep everything short.

Seattle has a congested schedule due to their Leagues Cup journey. While the motto is to win every game, the Sounders aren’t doing themselves any favor in league play with another midweek game on Wednesday in the Leagues Cup final against Club León. However, to Seattle’s credit, there are players that are returning from injury. Frei is back, Nouhou is defending well and Seattle having an attacking group of Raul Ruidiaz, Fredy Montero and Will Bruin certainly helps.

Seattle is going to put out their best XI against Club León to help prove that MLS teams can take down Mexican teams in Concacaf competition. However, could that cost Seattle against Sporting on Sunday?

What’s Next for the Sounders, Real Salt Lake?

As mentioned, the Sounders will be taking on Club León during the midweek on Wednesday night at 10 p.m. EST. On Sunday, it’s back to club play, taking on first-place Sporting Kansas City at 7 p.m. EST. Seattle has a busy stretch at the end of the season, making the comebacks of key players all the more important.