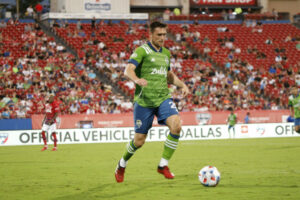 The Seattle Sounders had a small bump in the road, but it was nothing they couldn’t handle. Seattle, normally a team that starts off slow and then gets going toward the middle of the season had a hot-start this year. In the middle, there was a small gaffe, with a couple losses to Sporting Kansas City and San Jose. However, the Sounders are back to their winning ways.

It took Nicolas Lodeiro and Raul Ruidiaz only 30 seconds to have an impact when coming on against FC Dallas on Wednesday night in Frisco, Texas. Birthday coach Brian Schmetzer, who turned 59 yesterday, rested some of his usual starters. Spencer Richey got the nod in net to give Stefan Cleveland a break and posted a clean sheet. Jimmy Medranda, Kelyn Rowe, Danny Leyva and new signing Nicolas Benezet earned starts.

Meanwhile, Will Bruin returned from injury and started up top.

Bruin looked to have scored for the Sounders early in the second half, but the VAR ruled it offside. In the 63rd minute, Ruidiaz came on to replace Bruin after a solid return after injury. Meanwhile, it was a “Nico for Nico” swap, as Lodeiro entered for Benezet. It took 30 seconds for the two to link up on a goal.

Lodeiro immediately fed Ruidiaz the ball and the Peruvian had his first shot blocked by the defender. Ruidiaz then picked up his own rebound and shot higher, hitting the top of the crossbar and watching the ball getting a favorable bounce in goal.

FC Dallas didn’t let up entirely though, having good chances — especially early — in the match. In the 19th minute, Jesús Ferreira blasted a shot to Richey, forcing an excellent diving save. However, the ball bobbled a bit in the box before Shane O’Neill cleared it away. Ricardo Pepi was centimeters away from tapping it in before O’Neill cleared.

There are supersubs, but putting Nico and Raúl on the field together is next level

Three Takeaways from Seattle vs. Dallas

What’s Next for the Seattle Sounders and FC Dallas?

Seattle is currently riding a three-game unbeaten streak in league play, and a two-game winning streak after the thrashing of the Portland Timbers last weekend. Up next, the Sounders face their MLS Cup foes from last year: Columbus Crew SC. The Crew have been struggling mightily in the middle of the season, losing last night to the New York Red Bulls. In fact, Columbus is on a five-game losing streak.

However, Seattle is heading to their new home and Columbus has too powerful of a roster to look down on. That match will be Saturday, Aug. 21, at 5:30 p.m. ET.

Meanwhile, FC Dallas will look to bounce back against Texas enemy, the Houston Dynamo, on Saturday at 8:30 p.m. ET. Houston is coming off a loss to Real Salt Lake last night. Meanwhile, Houston has not won a match in 12 games — there have been some draws, but mostly losses.