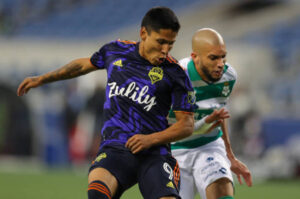 SEATTLE – Seattle Sounders hosted Santos Laguna on Tuesday night in the semifinals of the Leagues Cup. It was a hard fought and close game. The visitors played a great match but a Raul Ruidiaz goal at the death did them in.

The Sounders came out in 3-4-3 with Raul Ruidiaz and Freddy Montero leading the attack. The match had a good pace to start, despite the scoreless first half. Both teams were at their best in transition. The game got stretched at times with both teams playing quickly into space off turnovers, sometimes rushing things.

Raul Ruidiaz and Félix Torres both got the most of the looks for their teams. It was however Fredy Montero had the most spectacular chance of the first half in the 38th minute. Off a long ball out of the back, the striker chested the ball into the air. He attempted a bicycle kick but was unable to get the shot on target.

Diego Valdés had the best chance of the second half in the 65th minute for the visitors. On a free kick in the middle of the field in the final third, Valdés hit the right post with Stefan Frei unable to get a touch on the ball.

The game hung in the balance in the final minutes with Santos trying to force the issue and get a winner. It was however a breakdown on the counter attack that did them in in the third minute of stoppage time. With both fullbacks forward, Seattle got Ruidiaz loose at midfield through a Léo Chú pass into space. Ruidiaz ran on goal. His first shot was saved by Gibrán Lajud. Ruidiaz scored on his own rebound.

RAUL RUIDIAZ AT THE DEATH IN THE LEAGUES CUP SEMIFINALS pic.twitter.com/kn17ng1Pbz

Raul Ruidiaz leads the way: Nicolas Lodeiro was not in the lineup for this game. Ruidiaz stepped up in ways he has all season when needed. It was a great goal and basically a buzzer beater to send Rave Green to the final.

An open exciting game: This match could have gone either way. It was a fun and open game with both teams going for it. It was refreshing given how conservative roads teams usually are in Concacaf Champions League. It was also good to see an MLS team prioritize the opportunity.

Another USA-Mexico final: Well sort of. Technically it’s an MLS vs. Liga MX final. Seattle will play the winner of the other semifinal on Wednesday. Club Leon plays Pumas.